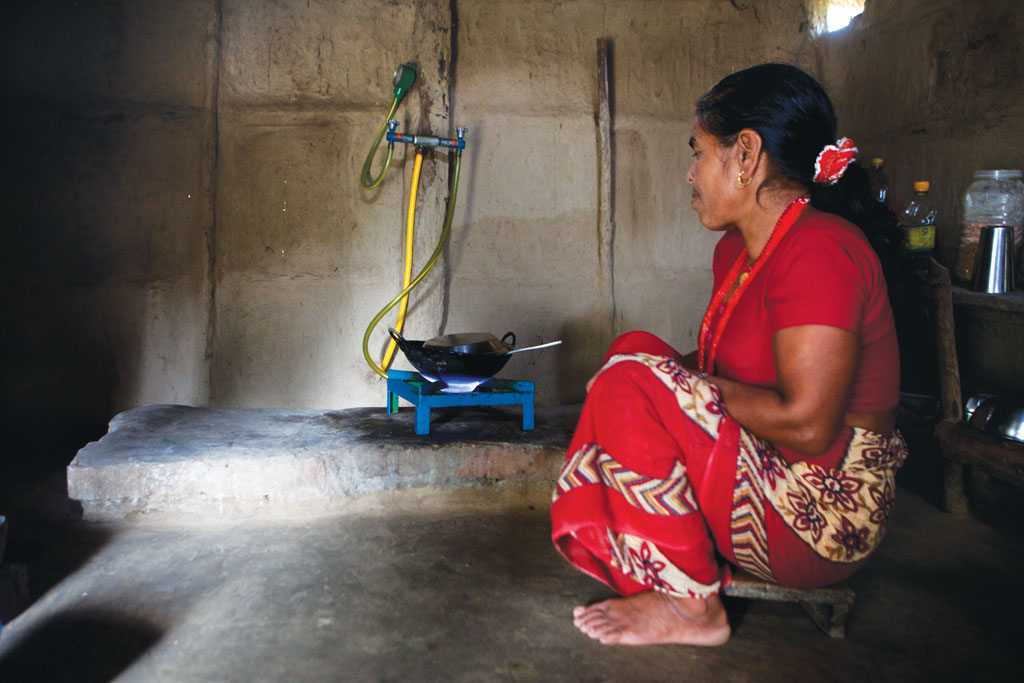 Ravi Dangol, a resident of Dallu Niwas in Kathmandu city, pat-iently listens to his neighbour’s daily rant of a severe crisis of liquefied petroleum gas (LPG), which forces his wife to use firewood for cooking. Dangol escorts his neighbour to a bin containing vegetables and food waste from his kitchen, and says, “We create fuel from this waste”. He then takes them to his terrace, where he has installed a modest biogas unit that runs on organic waste.

Dangol is one among 5,000 people in Kathmandu and Pokhra who have installed biogas units in their homes because of the eight-month-long economic blockage laun-ched by the Madhesi community protesting Nepal’s new constitution. The Madhesis, who comprise 22 per cent of Nepal’s popu-lation, virtually cut off the supply of LPG along with other essential goods from India. Nepal imports most of its LPG from India. Nearly 41 per cent of urban households in Nepal use LPG as their fuel for cooking, according to the World Health Organization (WHO). “We live in an apartment and can’t use firewood as the smoke and ash suffocate us,” rues Nabil Shrestha, a resident. Though the blockade was eased in mid-February, the LPG crisis continues.

As LPG tankers waited on the Indian side of the border, the Nepalese government tried to defuse the crisis by rationing and distri-buting half-filled gas cylinders. On Kath-mandu’s outskirts, gas cylinders are lined up for nearly half a km; each cylinder tied to the other to prevent theft.

The crisis is such that urban households could be seen queuing up for weeks to get even half-filled LPG cylinders. Even former deputy prime minister, Ram Chandra Pau-del, posted pictures on the social media of his wife cooking food with firewood in their backyard. As the economic blockade pro-longed, even the rationing scheme of gas cylinders fizzled out.

The blockage has unwittingly fuelled the demand for biogas plants. Three non-profits have started promoting community-based learning initiatives for the construction of biogas plants. Prakash Amatya, technical advisor of Guthi, a non-profit, which started a biogas initiative after the blockade, says that though Nepal has been recognised as one of the biggest users of biogas, a majority of users live in rural areas. But after the blockade, there has been a huge demand for biogas units in urban areas too. Responding to the sudden demand, Ne-pal’s nodal agency for promoting renewable energy technologies, the Alternative Energy Promotion Centre (AEPC), decided to boost one of its schemes, Sahari Gharelu Biogas Plant Yojana. The scheme provides a subsidy of Rs 10,000 (Nepalese) for urban house-holds to install biogas plants. AEPC has also designed biogas units suited specially for urban households (see ‘Fuelling change’).

Prakash Aryal of AEPC told Down To Earth that the demand for installing biogas units in urban households has increased by 30 per cent. “There is a daily demand for the installation of 20 units in Kathmandu alo-ne,” he says. Indira Sakhya of the Biogas Sector Partnership, which has won several awards for implementing biogas units in rural and semi-urban households, feels that this is the right time to boost biogas plants in urban areas. “It’s a perfect opportunity to change cooking fuel use in the country,” she adds.

But there are some hiccups. Krishna Chandra Poudel, a communication officer with AEPC, says urban consumers want in-stallation to be done within a day or two. “But the process of setting up biogas units takes longer—it includes a feasibility study and calculating how much food waste is generated by a household,” he explains. The problem is not there in rural areas because of the large availability of biomass in the form of cow dung, he adds. Another problem is the cold weather, which is affecting the production of methane gas. Guthi is work-ing on ways to keep the digester unit of the biogas plant warm to generate more meth-ane gas. Amatya says the resurgence of biogas plants has become a symbol of sustainability and self-reliance for land-locked Nepal, and it has, ironically, come during a political turmoil.