Can Nigeria kill the fuel subsidy?

With nearly 5,000% increase in expenditure on petrol import subsidy, IMF and World Bank call for funds for education and health sectors

Nigeria has spent an average 833 billion Nigerian naira (about $2.3 billion)  a year to subsidise petroleum imports in the past 12 years. The real amount has skyrocketed nearly 5,000 per cent and is projected to be at 1.15 trillion naira.

The government, however, allocated only 305 billion naira in its 2019 budget, the country may run into a massive budget deficit if nothing is done about the latest development. 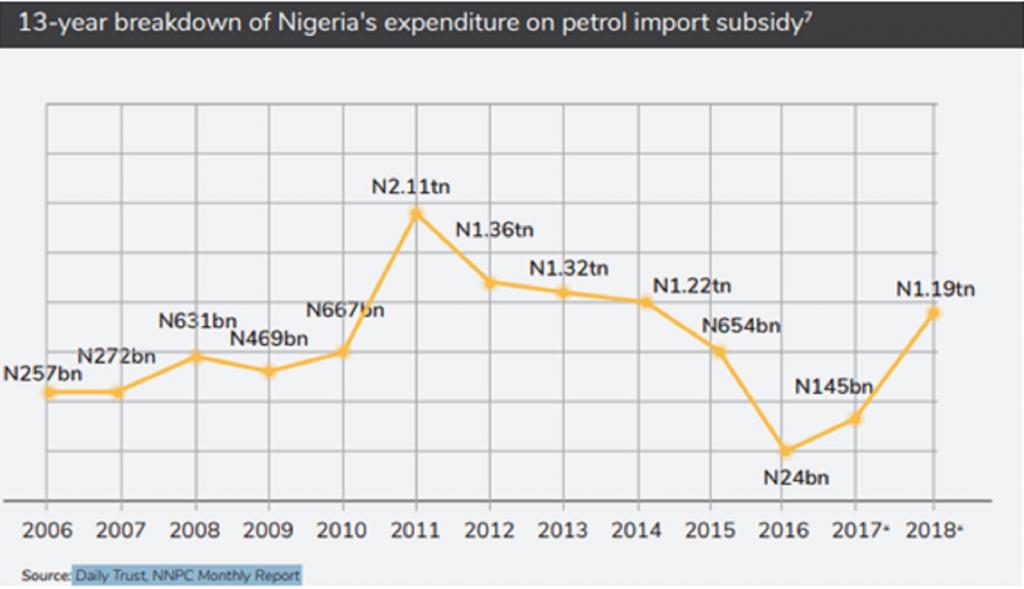 The Petroleum Support Fund (PSF) scheme was announced in 2005 to eliminate the effects of volatility in international crude oil and products and stabilise domestic prices.

With sluggish economic growth characterised by lackluster recovery, the money saved by removing subsidy can be utilised to develop education and health sectors in the country, said the World Bank and the International Monetary Fund (IMF).

BudgIT, a civic organisation, in a report said that the “fuel subsidy” deprives the nation of funds needed for critical socio-economic development. For example, the 10 trillion N consumed by the subsidy regime is sufficient to provide 27,000 mega watts (MW) of solar-powered electricity for stable power supply.

However, with no strategic framework for removal of the petrol subsidy programme and a population expected to balloon to 398 million people by 2050, Nigeria risks carrying the financial burden of the programme that could drown out development of its other sectors over the next 15 years, warns BudgIT in the report.

Both the economy and environment will be impacted by the burden of fuel subsidy. Slashing fossil fuel subsidies is not only a good idea, but very much needed since climate crisis is worsening, said the IMF.

Paying for wasteful consumption burdens an already cash-strapped government of much needed funds. Such subsidies also encourage uncontrolled usage of petroleum which pollutes the atmosphere locally and generate excess carbon dioxide (CO2) in the air, one of the main greenhouse gases responsible for global warming.

So, keeping its prices high will push people towards other alternatives. This will also encourage use of non-conventional energy sources. It may also lead to more premature deaths due to air pollution and other impacts due to increase in number of vehicles on road.

Rich reap the benefit of subsidies

The World Bank and IMF urged the government to cut costly national subsidies and provide them in a targeted fashion to poor communities. These subsidies disproportionately benefit high-income households and are a costly way to protect the poor.

However Nigeria does not intend to eliminate oil price subsidies as advised. According to Nigeria Finance Minister Zainab Ahmed, the country first needs to take steps to cushion the effects of subsidy removal.

At least 87 million Nigerians living under extreme poverty believe that subsidised fuel is the only benefit they get from the government. In fact, the fuel price is Nigeria is the sixth lowest in the world. It is priced at $0.4 per litre, while the average price of petrol globally is $1.14 per litre.

“We have to find a formula that will work for Nigeria. And until we do that, we should not be contemplating removing the subsidy,” said Ahmed.

Prior government’s attempts to withdraw the subsidies had failed in 2012 and 2015 too. In December 2015, the Nigerian government led by President Muhammadu Buhari had announced withdrawal of the subsidy, which was reinstated in 2016.

Minister of State for Petroleum Resources, Ibe Kachikwu, was quoted in media reports saying that “Nigeria’s continuous subsidising of petrol consumption means the Nigerian National Petroleum Corporation (NNPC) will remain unprofitable in for a long time”.

Kachikwu added that “the plan to exit importation of petrol by the end of 2019, was no longer feasible as all the projected measures to achieve this are now off the mark”.

“I think that if there is one area where I feel sad, it is certainly the refineries because there is a huge gulf between my expectations and the pronouncements that I had made in terms of where I’d like to be and what we have been able to achieve.

“The reality is that today, we are still below — probably 15 per cent utilisation of those refineries because they need to be maintained and worked. Completely refurbished, the last Turn Around Maintenance (TEM) was close to 10 years ago and they had question marks,” he was quoted as saying.

Even as the IMF called on governments around the world to cut back fossil fuel subsidies, it has also acknowledged that removing price support is incredibly difficult.

Governments support fuel subsidies for political advantages, since everyone likes energy. This makes it difficult to withdraw support, and in many countries, politically dangerous.

So, withdrawal of fuel subsidy may not be an easy task for Nigeria, but the nation can explore other strategic pricing mechanisms. An automatic fuel price-setting mechanism would sustainably remove inefficiencies from implicit fuel subsidies (0.5 per cent of GDP in 2018), suggests IMF.

Nigeria has curbed dieselisation with fuel pricing policy. According to a study by New Delhi-based non-profit Centre for Science and Environment, diesel prices are 1.4 times higher than petrol prices.

So even after removal of subsidy on petrol, it will still remain cheaper than diesel and will not encourage dieselisation. This fuel price differential is important to ban the import of diesel cars until Nigeria introduces the Euro VI emission standards.

Considering the environmental and health cost of subsidised petrol, another study has suggested imposition of an additional tariff or tax per unit of petrol — called the Pigouvian Tax. It can be used to internalise the external cost of petrol consumption — from air pollution, traffic congestion and related health conditions.

This tax should initially be charged from firms running on petrol-powered generating plants and then gradually extended to households and motorists, especially those driving fuel-guzzling vehicles.

The revenue obtained from this kind of additional tax can then be reallocated to subsidise renewable technologies, to the extent that it enhances their market penetration, uptake and demand for petrol and other fossil fuels is reduced.

Removal of subsidy will also force the government to focus on enhancing the domestic refining capacity and reduce Nigeria’s dependency on fuel imports.