If we really want to save the Himalayan oak, we should not chop them for developmental activities

Uttarakhand should use inflammable chirpines to generate power. This would contain forest fires that are threatening native oak trees and provide employment 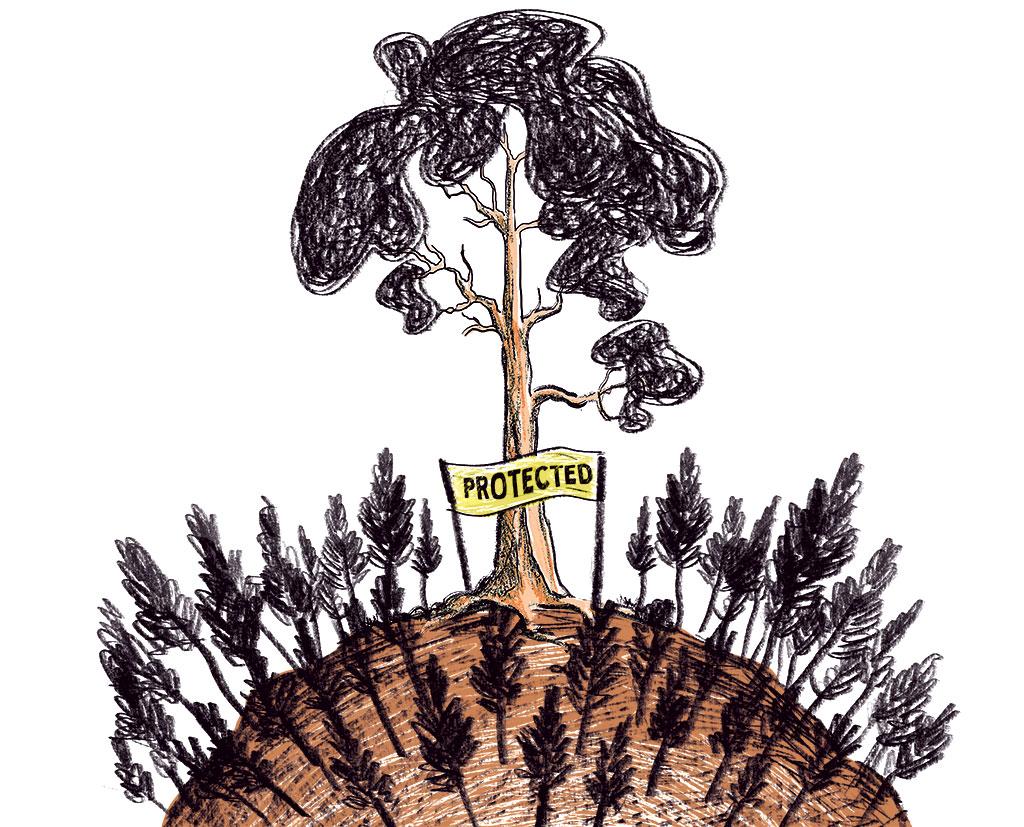 My house, located in Uttarakhand’s Tehri Garhwal district, has a panoramic view of the snow-capped mountains and forests. I spent my childhood surrounded by luxuriant oak forests, which are gradually disappearing. The forests are threatened by alien species such as chirpine (Pinus roxburghii) that are highly inflammable and increase forest fires.

Oak, scientifically known as Quercus leucotrichophora, belongs to the Fagaceae family and has great social and ecological relevance in the Western Himalayan region. It provides a large array of ecosystem services such as structuring the upper soil, sustaining the hydrological regime and governing the hydrological cycle of hills. Uttarakhand people also use it as fodder and fuelwood. In fact, oak-based agroforestry has traditionally been popular in the region as it conserves soil and water in the rain-fed area.

But oak plantations have in the recent past been replaced with chirpine, a pioneer species which can survive and flourish in extreme conditions and can endure forest fires. Today, chirpine covers 16 per cent of Uttarakhand’s forest area. Chirpine, a variety of pine, is mainly responsible for the infernos and is not good for biodiversity. Also, the needle-like leaves of the tree are highly inflammable and prevent regeneration of undergrowth on the forest floor.

So how can the forest fires be contained? For starters, the government needs to hire more forest staff to make fire lines and clear dry pine needles before summer. But that alone might not be enough. The state also needs to find a way to contain chirpine through a process that involves the local people. A solution could be harnessing chirpine’s potential as a fuel by setting up small power plants. One example of this is the Avani Bio Energy, which currently has several chirpine-fuelled power plants in the state. The company, set up in 1997 in Pithoragarh, initially experimented with chirpine in 2003 when it started an ambitious 120-kw power plant. The plant struggled to get enough pine needles forcing the company to reduce its capacity to 10-kw. The company has now successfully set up plants in almost all forest-fire prone areas. The company is now planning to start several power plants, including one in Almora district. They are also converting chirpine needles into charcoal as it is also good species for charcoal making. Besides, it is setting up two 28-kw plants. The initial cost of generating a kw of energy using pine is Rs 4.5-5, which reduces when produced in large volumes. The plants not only generate local employment but also reduce the chances of forest fires.

States with considerable chirpine trees should replicate the model. In Uttarakhand, the gross annual pine needle yield has been estimated as 1.97 million tonnes which can support energy production. Chirpine needles, which have over 50 per cent holocellulose, can be used to make pulp and paper. The only problem is its high lignin which requires high bleach chemical. The government also needs to have policies on pine harvesting and logging, especially above 1,000 m.

The Uttarakhand government is drafting a policy on the energy development from chirpine needles. It suggests a procedure for purchasing pine needles from village residents, Joint Forest Management Committees and van panchayat and a minimum support price for chirpine needles. It also talks about incentives to pine collectors. Increasing pine harvesting alone may not help. It needs to be managed properly. For this, the government should avoid chirpine logging, train people on making chirpine briquettes and create standards for plants to convert pine needles into vermicompost.

Besides utilising chirpines, the state government should also safeguard oak plantations through a series of steps such as training people on how to remove oak branches for fodder so that they do not pull out acorn, essential for forest regeneration. Agrisilviculture, a type of agroforestry, should also be popularised where people grow alternative fodder tree species like bhimal (Grewia optiva), khadik (Celtis australis) and guriyal (Bauhinia variegata). This will reduce the use of oak as nutritive fodder. Farmers should also be given incentives to follow agroforestry using oak. For this purpose, the National Agroforestry Policy 2014 guidelines can be followed and tweaked to make it state-specific.

For scientific documentation and research purposes, a geographic information system map of oak and pine forest is required. We also need an integrated study on water recharging by forest scientists, geologists and geo-hydrologists to understand the reasons behind water loss and the role of oak and underground phyto- sociological interaction. Oak trees should not be chopped for developmental activities such as construction of roads. We need to understand that oak trees can play a crucial role in saving the natural water springs in the area. The study should understand the cause behind the water loss and the role of oak and underground phyto-sociological interaction.

If we really want to save the Himalayan oak, we need to formulate an Oak Board to protect, conserve and propagate the tree variety. The board can be on the lines of the Rubber Board or the Tea Board. The government started the Tiger Project in 1973 to save the national animal. Setting up the Oak Board will save many more tigers and leopards who take shelter on the tree.

The author works with the Indian Institute of Forest Management, Bhopal.