Fuelling problems: India’s poor are being forced to return to unclean cooking fuels; here’s why

With LPG prices crossing the Rs 1,000-mark, the poor now have to make unfair choices about their basic standard of life 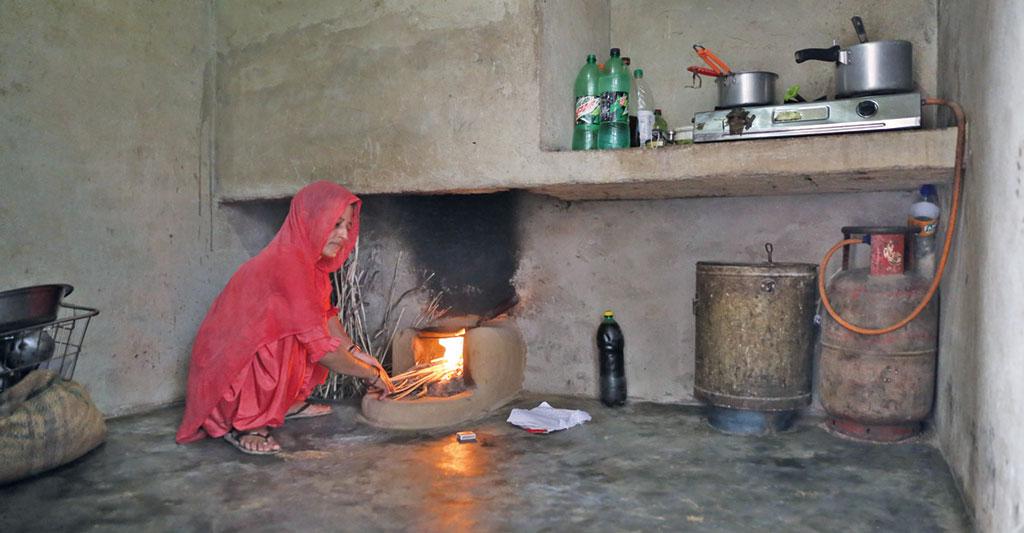 Munni Kinha from Gothda village in Haryana's Bhiwani district uses cow dung and firewood for bulk of the cooking, and LPG only for making tea and chapatis (Photograph: Sunny Gautam)

Farm labourer Mahadesha from Karnataka, groundnut farmer R Chandrashekharreddy from Andhra Pradesh, homemaker Geeta from Haryana and slum dweller Naresh from Ghaziabad are facing the same dilemma. The cost of a liquified petroleum gas (LPG) cylinder has crossed over Rs 1,000 on the back of regular price revisions and this is forcing them to make unfair choices about their basic standard of life.

“If I buy an LPG cylinder now, I will not be able to send my children to school this month,” 35-year-old Mahadesha from Thigadahalli village in Karnataka, said.

His calculation is simple. Over the past year, LPG cylinders have become almost Rs 200 costlier, which is half of what he spends on sending his two children to school. “If we continue to use LPG, then cooking fuel alone would eat up one-fourth of my household income,” he said.

Some 600 km away, Chandrashekharreddy, the owner of a two-hectare farm in Kandukur village in Andhra Pradesh, is busy setting up a firewood stove at home. “I simply cannot afford LPG with my monthly income of Rs 8,500 anymore,” he said.

Almost 10 per cent of the households in his village have already rolled back to using fuelwood. “Most other families are also thinking of going the same way,” he said.

In the pre-pandemic period, an average poor household in the country could at most spend Rs 15 a day, or Rs 450 a month, on cooking fuel, said Svati Bhogle, founder of Sustaintech India Pvt Ltd, a company that provides fuel-efficient cookstove to women street food vendors in Tamil Nadu and Karnataka.

“The income of most poor families has shrunk after the pandemic. A Rs 200 rise in LPG basically means it has become out of reach for them,” Bhogle said. 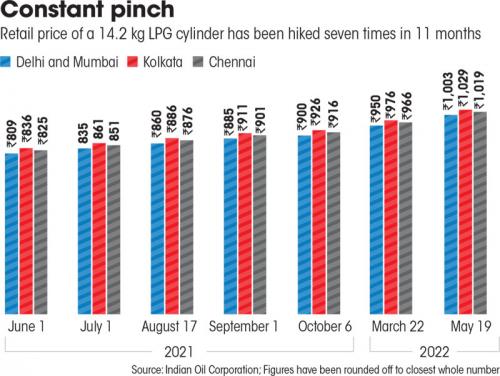 In 2020, Delhi-based non-profit Council on Energy, Environment and Water estimated that rural households with LPG connections were spending 6.7 per cent of their income on fuel.

This was 40 per cent higher than the amount they were paying before shifting to LPG. A subsidised LPG would cost Rs 580 in 2020. This has now increased to Rs 1,000.

The Centre this May announced a Rs 200 subsidy on 12 refills a year for households under the Ujjwala scheme, though the people Down the Earth spoke with said they were not aware of the same.

The rising LPG price is also forcing households using other fuel sources to pay more. In Chennai, for example, most families living in low-income settlements of Chetpet and Perumbakkam still use kerosene for cooking.

“Kerosene in the city is available at a subsidised rate of Rs 15 a litre at fair shop prices. Due to the increased demand, families are now being forced to buy kerosene from the black market at a much higher price,” said Vanessa Peter, founder of the Information and Resource Centre for Deprived and Urban Communities, a non-profit in Chennai.

She added the price of kerosene in the black market had increased by almost Rs 40 to Rs 100-120 a litre in the past six months.

“Farmers and labourers are most likely to use solid fuel because they do not have a fixed source of income. In contrast, salaried people, cattle rearers, and business owners are less vulnerable,” said Vikesh Sharma, a research scholar at the Indian Institute of Technology, Bhubaneshwar, who was part of a 2022 study that looked at clean cooking fuel usage in Bihar, Jharkhand, Madhya Pradesh, Odisha, Uttar Pradesh and West Bengal.

The study found that residents in Bihar and Uttar Pradesh are more likely to use dung cakes and other fuels, compared to firewood and chips.

The report, based on a survey of 8,500 households in 51 districts, noted: “A possible reason behind this result is that while MP [Madhya Pradesh], Odisha, and Jharkhand have rich forest cover, UP [Uttar Pradesh] and Bihar have deficient forest cover.” It also found that in rural areas, most landholders could not afford LPG connections.

On August 2, Union Minister of Finance Nirmala Sitharaman defended the price hike in Parliament by saying that the cost of “LPG is not in our hands, if we are importing it and the prices are going up, obviously we will have to make sure that we give it at a concessional rate and we’re giving it”.

Sitharaman’s justification appears to be weak as LPG prices have been on the rise in India, even before the current spike in the international market.

An analysis by Delhi-based think tank Observer Research Foundation shows domestic price of LPG rose by 110 per cent between April 2014 and October 2021, even though international prices fell by 48 per cent between 2013-14 and 2019-20. 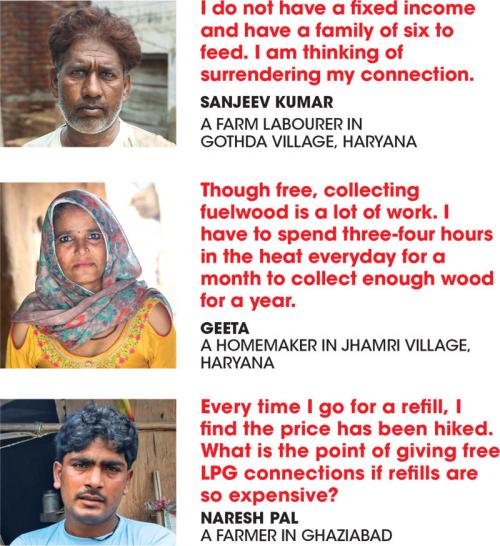 This constant increase in the LPG price might impede the progress that the country has made in ensuring access to clean fuel since the launch of the Ujjwala scheme in 2016.

This has been achieved through the distribution of free connections to over 90 million poor households across the country. The beneficiaries include 35 per cent of scheduled caste and scheduled tribe households.

While the scheme has successfully increased the beneficiary base, it has struggled to ensure subsequent refills, as this cost has to be borne by the households.

Over 9 million beneficiaries did not get a single refill in 2020–21 and another 10 million refilled their cylinders only once throughout the year, shows a government reply to a right to information application filed by Chandrashekhar Gaur. The problem will only worsen now.

“Even before the price rise, only 20 per cent of the poorest in Bihar could afford LPG. Most of them are likely to return to fuelwood,” said Kishori Das, state president of Patna-based non-profit Vanchit Samaj Morcha.

While the Centre maintains that LPG price hike makes economic sense, the increased use of unclean fuel as a result of it is bound to have a serious impact on people's lives, particularly women and children.

“We have already refilled the cylinder twice and cannot afford a third refill. So, I have again started collecting fuelwood,” said Geeta from Jhamri village in Haryana’s Jhajjar district.

She anticipated spending at least three-four hours daily for a month to collect enough fuel to last the family for a year. “It is a lot of hard work which stopped after we started using LPG,” she said.

There is also a well-documented health cost, which is at the heart of the debate.

A 2022 survey conducted by Nagpur-based non-profit Centre for Sustainable Development found that 81 per cent of women using unclean fuel in Nagpur complained of chronic coughing, as opposed to 23 per cent of the women who use LPG.

Furthermore, 65 per cent of the women using solid fuel said they have eye irritation, compared to 18 per cent of women using LPG. The burning of biomass in households is the single largest cause of air pollution deaths in India.

The country reported 0.6 million deaths due to household air pollution in 2019, as per the Global Health Burden report by The Lancet. The Centre must weigh these long-term impacts when deciding LPG prices.