The top producer of crude oil in Africa is exporting cheaply made charcoal to the world, especially EU, which is often labelled incorrectly as 'sustainably cultivated' 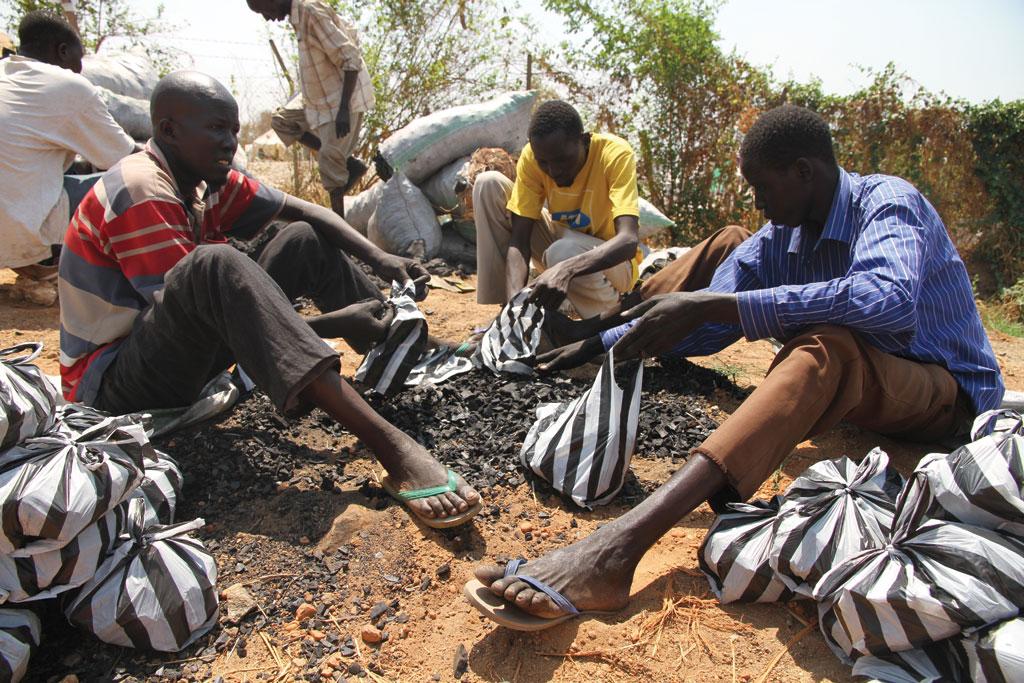 Land degradation and droughts have forced several farming communities in Nigeria to abandon farming and shift to the lucrative trade of charcoal production (Photo: Wikimedia Foundation)

Nigeria is losing its last remaining patches of thick forests, and at an alarming rate. According to the Food and Agriculture Organization, the country has lost 50 per cent of its forest cover in two decades and is losing at 5 per cent a year, the highest in the world. At this rate, experts warn, the country would lose all its forests by 2047. And a prime reason for this is Nigeria’s growing appetite for charcoal—a cheap source of energy produced through pyrolysis, or burning of wood under high temperature in the absence of air.

Though Nigeria is the top producer of crude oil in Africa, it reels from severe fuel shortage because it lacks the infrastructure to refine crude oil at home. “Charcoal has been the most preferred fuel in the country, because gas is costly, kerosene is scarce and power supply is erratic in Nigeria,” says Stephen Aina, senior conservation officer at non-profit Nigerian Conservation Foundation. An analysis by Down To Earth shows that a household using charcoal spends an average of US $7 a month on fuel, which is almost half the price of LPG. “Even charcoal stoves are affordable and produced locally. Thus 93 per cent of the households alternate between firewood, kerosene, electricity and charcoal for cooking fuel,” says Aina, adding that Nigeria is one of the world’s largest producers and exporters of charcoal.

But of late, there has been a surge in the country’s charcoal production. UN data shows that the production has increased by 30 per cent between 2010 and 2015 to about 4 million tonnes a year. While there are several factors fuelling the surge, analysts cite increasing land degradation as the major reason.

Traditionally, most people in Nigeria used to produce charcoal at an individual level. They would fell trees on their plots and nearby forests, cover the pile of wood with earth and light a fire, letting the wood smoulder for about two weeks to produce charcoal. It was then either used for household consumption or sold to traders for an additional income. Traders usually offer $70 for a tonne of charcoal and export it for $257 per tonne. But with rising demand for Nigerian charcoal, particularly those produced from the tropical forests in southern delta—charcoal produced from hardwood are easy to light and burn for a long time due to high calorific content—people started producing it at sub-industrial and industrial level.

Uncontrolled and indiscriminate felling of both mature and nearly-mature trees became the norm. In 2000, some 2.4 billion cubic feet of round wood was produced; 85 per cent of it was used for fuel, as per a study published in IOSR Journal of Agriculture and Veterinary Science in 2013. This, coupled by illegal commercial logging and frequent droughts, has fuelled land degradation in the forest-rich deltaic region. Over the years, several farming communities, including the Bassa, Dukawa, Hausa, Tiv and Zuru, have abandoned farming and made their ways into the denser forests for producing charcoal at a commercial level. “To them, it is a business. No one is bothered about the environmental impact of commercial logging, let alone afforesting the areas,” says Kabiru Salami of the University of Ibadan.

The thriving charcoal industry is already threatening the Nigerian-Cameroon Chimpanzee, which has been declared endangered by the International Union of Conservation of Nature in 2008. Only 6,500 of the chimps now remain in the two countries. “Removal of hardwood, mostly fruit and fodder trees, destroyed the viable habitats for the chimps,” says Aina. He adds that the heat and smoke generated during producing charcoal also affect the bee population. The quality and quantity of honey production in Nigeria has significantly reduced due to the loss of natural beehives. As per local media reports, several tree varieties, including aayan tree (African satinwood or Nigerian satinwood), igba tree (African locust bean) and iroko tree (African teak), are fast disappearing due to commercial charcoal production.

Even as Nigeria continues to incessantly cut its forest cover, environmentalists say simple tweaks hold the solution. For instance, Nigeria exports charcoal to some 10 countries—Ukraine, USA, the UK, China, Poland, Germany, France, Niger, Cameroon and Benin Republic. A bulk of shipment—over 100,000 tonnes a year—goes to Europe. “Charcoal production is largely driven by profits earned through exports. So the current practice is the best quality charcoals are exported, while the remnants are sold locally,” says Aina. If EU can switch to electricity- or gas-heated barbecues, it will immediately reduce its charcoal demand.

At the same time, for better monitoring, charcoal should be included under the European Timber Regulation (EUTR), which came into force in 2013 to stop illegal wood products from entering the EU. Since charcoal is not monitored under EUTR, companies selling it in EU countries are not obliged to furnish details about where and how it was procured. “Why certain wood products are not included in the regulation is a puzzle to me,” says Johannes Zahnen from the World Wide Fund for Nature (WWF). He was part of a WWF study which found that 80 per cent of charcoal products sold in Germany are labelled with incorrect information about their origin. “(The) Charcoal industry is hiding from the public the destruction it is causing by putting labels on paper sacks which read ‘sustainably cultivated’,” he says.

On the domestic front, Nigeria in May 2016 put a ban on charcoal production after producers and exporters refused to adhere to the cut-one plant-two policy. The ban had to be rolled back two months later as charcoal is the lone energy source to a major Nigerian population. “The problem is complicated because the federal government owns the policy and the machinery to enforce the law, but the states own the forest. The states also see logging as a form of revenue generation,” says Oyo State, chief executive officer of the Forest Research Institute of Nigeria.

After the unsuccessful ban, the government is now looking at solar energy, which is environment-friendly and economically viable. Nigeria’s National Council on Environment, at its last meet, said the country needs policy measures to promote solar energy and energy-efficient cook stove. While focus on renewable is a right step forward, its success will largely depend on whether the country can sensitise the people to embrace it.

(This article was first published in the February 1-15 issue of Down To Earth, under the headline 'Smouldering threat').