However, it expects carbon dioxide emissions to continue rising for decades

The International Energy Agency (IEA) has projected a rapid increase in installed capacity of solar power by 2040, from 495 GW now to 3,142 GW, in its latest World Energy Outlook (WEO).

This is a massive departure from its previous stance as the projected capacity addition trend now is almost the exact opposite of the projection made in 2018.

The strong growth of solar has now been projected on account to optimistic policy changes around the world, including China’s partial reversal of a decision to reduce subsidies; India’s announced target of 450 GW of renewable energy capacity by 2030; and strengthening of some renewables portfolio standards in the United States.

Despite turning bullish on solar, IEA remains conservative in its projections compared to other energy thinktanks such as the International Renewable Energy Agency (IRENA) which in its recently released 'Future of Solar Photovoltaic' report projected solar growth to be over 6,000 GW by 2040.

IEA is an inter-governmental organisation established in the framework of the Organisation for Economic Co-operation and Development (OECD). The WEO is its flagship publication.

In the 2019 edition, IEA projects a ‘profound shift’ in global energy systems, with rapid increase in the installed solar capacity by 2040, flattening of coal-based power generation and a decline in reliance of oil.

However, it expects (CO2) emissions to continue rising for decades unless polices reflect greater ambition on climate change. This is primarily due to the longevity of the existing stock of coal-based plants, which account for 30 per cent of all energy-related emissions.

In the developing countries of Asia where the majority of the new plants are located, the average age of coal-based plants is just 12 years.

The report models three policy scenarios. The first is the Current Policy scenario where the world continues to function according to the old regulations and the energy demand rises annually by 1.3 per cent by 2040.

The second scenario is the Stated Policy Scenario, formerly known as New Policies Scenario, which incorporates new policies already announced by governments, where the energy demand rises by one per cent per year.

The third, more ambitious, Sustainable Development Scenario (SDS) scenario charts out a path aligning with the Paris agreement to maintain the global temperature well below two degrees Celsius (°C) and pursuing efforts to limit it to 1.5°C.

However, the report does not define a pathway for the world’s temperature increase to remain below or at 1.5°C from the pre-industrial levels.

Additionally, the SDS comes quite close to the Stated Policies scenario, with the additional reliance on carbon sequestration beyond 2050 to overcome the overshoot. IEA points to the difficulty in the sustainable delivery of an extensive end-of-century deployment plan.

Under the Stated Policy scenario, solar surges ahead of coal and gas to become the largest source of installed power by 2035, if stated policies and targets are perused.

Growth of coal-based capacity is expected to decline marginally post-2020, and remain around 2100 GW.

As for generation, the share of renewable generation could nearly double, from 26 per cent today to 44 per cent to 2040, surpassing coal-based generation in 2026. 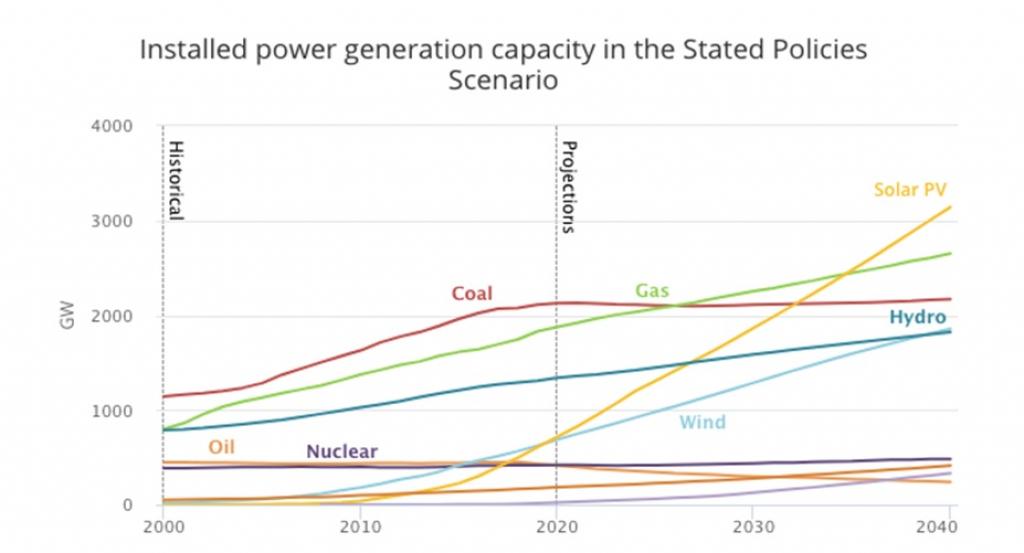 The IEA has long faced criticism for being overtly bullish with its prediction of coal and other fossil fuel dependence, and underpaying the importance being gained by solar PV.

Even in successive publications following the 2012 report, the projected amount for 2015 remained lower than actual. Similarly, its 2013 report projected a growth of 29 GW by 2018 whereas the actual in 2018 was close to 108 GW.

Moreover, in its 2016 projection it suggested a decline in solar capacity growth post 2035.