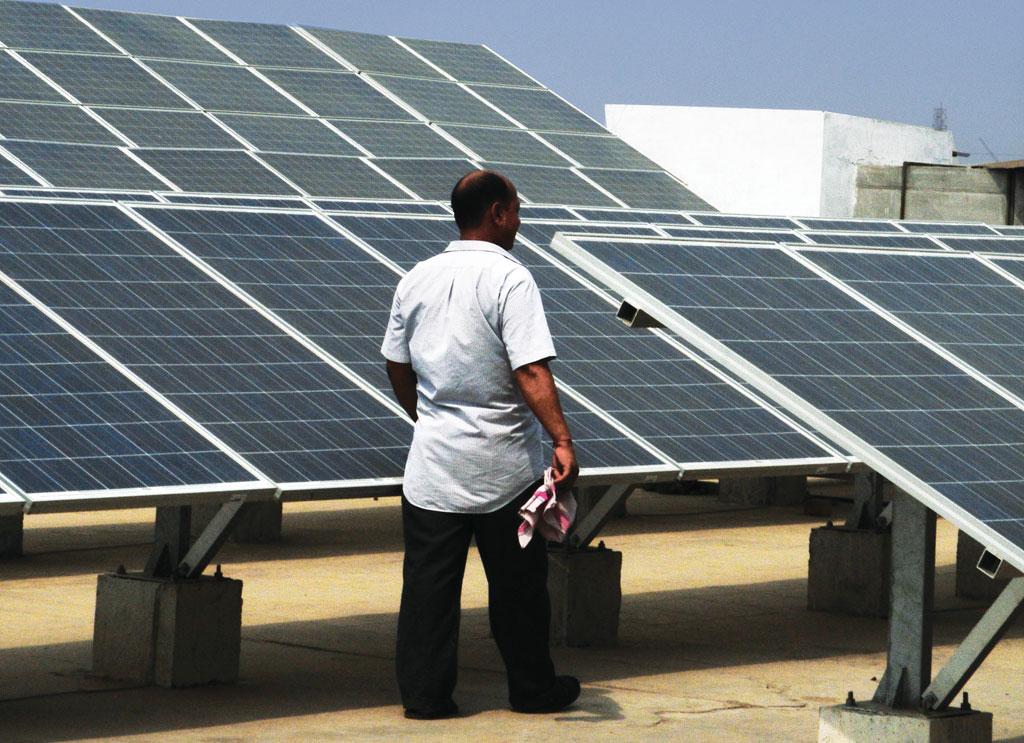 Absence of policy could make India miss its solar rooftop power generation target. In 2015, the Union Ministry of New and Renewable Energy (MNRE) announced its plan to generate 100 gigawatt (GW) solar power by 2022. Of this, 40 GW was to be through solar rooftop systems. But till March 2017, the country has installed only 0.67 GW of solar rooftop capacity, shows MNRE data (see ‘Slow start’).

To promote the use of renewable energy in buildings, the Union government released model building by-laws and amended the Environmental Impact Assessment (EIA) Notification, 2006, in 2016. The EIA notification states that all new buildings constructed on above 5,000 sq m built-up area must have at least 1 per cent of the sanctioned load from renewable energy sources. The model building by-laws mandate that all new buildings on plot sizes above 100 sq m need to install solar photovoltaic panels atop buildings.

“But the problem is that all the regulations are for new buildings. Existing buildings or those whose construction started before 2016 are not covered,” says Aruna Kumarankandath, programme manager at Delhi-based non-profit Centre for Science and Environment (CSE). On an average, conceptualising, designing, getting approvals/clearances and construction of buildings takes three to five years. In five years, India would have missed the target it set for itself.

According to a 2014 report by The Energy and Resources Institute, a Delhi-based non-profit, the total market potential for rooftop solar photovoltaic cells in urban settlements of India is around 124 GW. This potential cannot be realised unless states and Union territories integrate the Centre’s policies into their building by-laws. But only Haryana and Chandigarh have done that so far. Haryana has asked the owners of all non-residential buildings, including the existing ones, to set up rooftop solar panels (see ‘Standout states’). An order passed by the Haryana Renewable Energy Department (HAREDA) on March 21, 2016, mandates setting up solar rooftop systems on all new residential buildings and both new and old commercial and government buildings. If these provisions are flouted, the Power Utilities Department of the state government has the authority to disconnect the electricity connections after serving notice to the users. Chandigarh has also mandated provisions similar to those of Haryana for the installation of solar rooftop systems on buildings.

But even in Haryana and Chandigarh, the government is not monitoring the implementation of the policy. “Although solar rooftop installation is happening in institutional and commercial buildings, data on non-compliance and penalty imposed on users is not available,” says F R Naqvi, superintending engineer, Dakshin Haryana Bijli Vitran Nigam Limited. Adds Shubhra Puri, founder of Haryana-based non-profit Gurgaon First, “While the policy is in place, administrative will to enforce it is missing.

In Gurugram at least, it has taken a lot of time for net-metering to be operational and there are several glitches.” Net-metering is a special metering and billing agreement between power utilities and consumers, which facilitates connection of renewable energy-generating systems to the discoms’ network. It allows consumers to export surplus power to the grid and reduce their power bills.

“We should not impose rooftop solar systems through regulation. If you think it is economically viable then just educate the people. It should all be market-driven, only then will it be a sustainable model,” says Shailendra Shukla, chairperson, HAREDA. Delhi has also integrated the new policies into its building by-laws, but have not incorporated the solar rooftop clause.

“The focus of most state governments has been on attracting consumers by offering subsidies, promoting installation of solar rooftop systems through state-authorised installers and issuing net-metering regulations,” says Kumarankandath.

Solar rooftop is also a perfect solution for commercial and institutional buildings that operate mostly during the day. Their rooftops can be utilised to generate electricity, and they can, partially or completely, replace diesel generators. This would also help them reduce their electricity bills.

(This article was published first in the 16-31 August issue of Down To Earth, under the headline, 'On track to miss target').