As the Union government prepares to auction 41 coal blocks across India, data from a report has shown the country’s coal power fleets to be under-utilised, with the worst performance seen in the financial year ending March 2020.

The performance of coal power fleets declined by 21 per cent from 78 per cent in 2010 — a historical low — according to the India’s Clean Power Revolution report published June 26, 2020 by BloombergNEF. 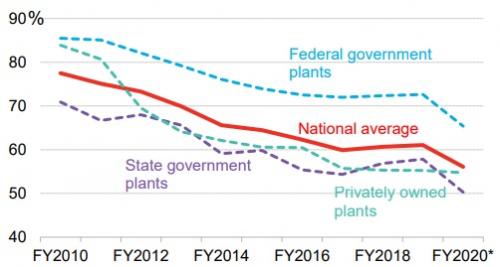 The Centre had over-estimated the growth of the countrywide power demand, leading to over-investment in new coal capacity: Coal plants of 96 gigawatts (GW) were added to the grid between 2011 and 2016 alone, the report pointed out.

“Renewables have priority dispatch. Newer installations have lower levelised costs of energy, helping them secure a larger share of growth than coal,” the report said.

The situation for coal, compared to that of renewables, is going to be tough, according to the report’s estimates.

Renewable energy will displace coal in the future in terms of storage, the report pointed out. “New onshore wind and new solar combined with battery storage will out-compete new coal power plants on a levelised basis by 2023 and 2029 respectively,” the report said.

The Central government announced the first commercial auction for coal blocks in the country and released a list of 41 coal blocks that will be auctioned in the first lots.

In a virtual address, Modi though termed it as the “un-lockdown” of the coal sector. The announcement, however, was marked by protests from several states including Jharkhand and Chhattisgarh. The states have disagreed with the move, with Jharkhand going to court against the decision.

Financers across the world have been withdrawing their investments in coal. Renewables in India as well have been outperforming coal.

If the mines are auctioned this year, production will commence in 2023 or 2024. There is, however, uncertainty over how much potential coal will have in the country five years down the line, Sreenivas said.