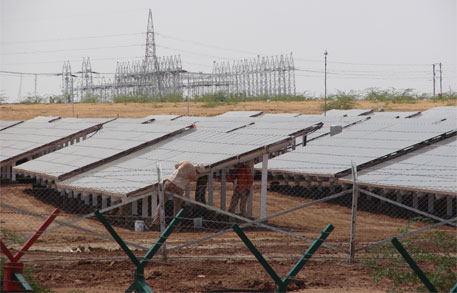 Prime Minister Narendra Modi has given his approval for increasing the national solar mission capacity from the current 22 gigawatt (GW) to 100 GW by 2022.

In a bid to reduce the use of fossil fuels and increase the capacity of renewables, the Centre had announced the Jawaharlal Nehru National Solar Mission (JNNSM) in 2010 for developing 20-GW capacity solar grids and 2-GW capacity off-grid solar applications.

In a departure from earlier occasions, the official announcement followed the detailed plan of how the government plans to achieve the new target (upgrading to 100 GW), unlike earlier occasions when only targets were announced.

The 100 GW solar power capacity has been divided into rooftop solar electricity generation (40 GW) and large and medium-scale grid-connected solar projects (60 GW).
According to the Ministry of New and Renewable Energy (MNRE) officials, it is expected that the total investment for upgrading to 100 GW solar power capacity will cost around Rs 6,00,000 crore ($94 billion).

A statement issued by the Cabinet read, “(The) Government of India is providing Rs 15,050 crore as capital subsidy to promote solar capacity addition in the country. This capital subsidy will be provided for rooftop solar projects in various cities and towns, for viability gap funding-based projects to be developed through the Solar Energy Corporation of India (SECI) and for decentralised generation through small solar projects.”

Apart from capital subsidy, which is similar to what previous government had also done in the first phase of JNNSM, Rs 90,000 crore would be created using the bundling mechanism with thermal power. In common parlance, bundling refers to selling electricity in bundles, for instance, the sale of one unit of solar power bundled with four units of thermal power.

The energy ministry defines bundling mechanism as the “bundle of relatively expensive solar power with power from the unallocated quota of the Government of India (Ministry of Power) generated at NTPC coal-based stations, which is relatively cheaper, and sell it to the distribution utility at the weighted average price”.

The World Bank had in its report, Paving the Way for a Transformational Future: Lessons from Jawaharlal Nehru National Solar Mission Phase I, states that “bundling of solar power with cheaper conventional power reduces the tariff impact of solar power on the distribution utilities”.

Large public-sector companies, independent power producers and state governments will have to contribute to achieve the ambitious target of 100 MW capacity addition.

Experts feel that ambitious targets are always a good way to promote development in any sector, given that the benefits of increasing solar power reach all. The positive sides of solar power are energy security, climate protection, reduction in pollution and health benefits. The 100-GW objective should provide a direction for developing domestic solar manufacturing in India as well.

But there is a glitch in the government’s policy. Unfortunately, the focus of the capacity addition is only for grid-connected projects and has less to do with providing power to 300 million people, who still do not have access to electricity in India.

Jasmeet Khurana of Bridge to India said, “These projects can ideally be located near towns and village clusters. This will help provide reliable power supply to such areas, minimise transmission losses and in the medium-to-long-term minimise the need for new investments in transmission infrastructure for anticipated growth in consumption.” Bridge to India is a Delhi-based solar power consultancy.

Under the current scenario, solar development has also not been considered as part of the 24/7 power supply. Usage of decentralised renewable power generation for energy access has not been accounted for in the governemnt’s scheme. All the expansion made in the solar field has been on account of large-scale projects feeding grids. But this does not guarantee energy access to millions.

“The biggest social and economic impact of renewable energy will be providing clean energy to the energy deprived. But there are no incentives focused on developing decentralised energy-access solutions,” Chandra Bhushan, consulting editor of Delhi-based non-profit Centre for Science and Environment, said.