New solar technology from Sweden claims to be the most efficient

The plant needs no water to generate electricity, unlike other concentrated solar power plants 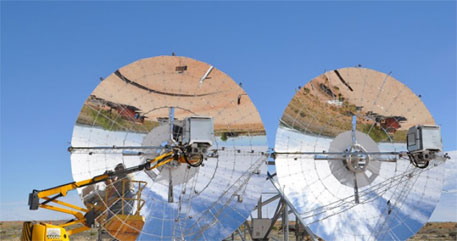 Swedish company Ripasso Energy successfully demonstrated a new concentrated solar power (CSP) system that provides electricity by combining a Stirling power converter with a parabolic mirror. It claims that the system sets the world record for generating electricity at capacity utilisation factor (CUF) of 32 per cent.

The mirrors in the parabolic dish concentrate the sunrays to heat a small point which in turn runs the Stirling engine. The Stirling engine uses temperature difference of a permanently gaseous working fluid to drive the pistons. It was developed in 1816 by Robert Stirling in Edinburgh, Scotland, as an alternative to the steam engine.

Ripasso Energy’s plant is located in Northern Cape Province in the Kalahari Desert in South Africa. The test site uses local manufacturing capacity to develop their model. “Our whole team in South Africa has been hired locally, and our new systems have all been built with local South African labour. It works great,” Ripasso Energy CEO Gunnar Larsson told The Guardian.

“Our major challenge over the last couple of years has been to get the technology accepted by the financing community, especially from the banks,” said Larsson. Ripasso Energy has been able to secure funding and will be transitioning to the commercial phase.

The technology has some inherent advantages over traditional solar thermal and solar photovoltaic (PV) plants. The plant needs no water to generate electricity, unlike established CSP plants which use water like any conventional fossil fuel-based generation system.