Overshadowed: Will wind power lose out to solar energy in India 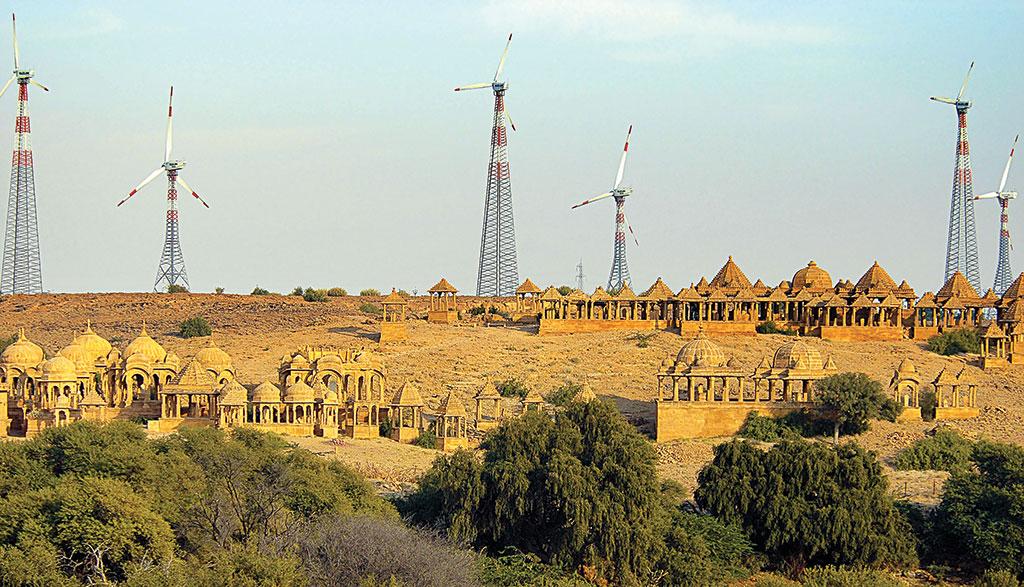 India has pledged to install 60 GW of wind energy capacity by 2022. Setting up wind-solar hybrid parks may help achieve this (Photograph: Reuters)

In 2015, the Union Ministry of New and Renewable Energy (MNRE) embarked on an ambitious journey to install 175 gigawatt (GW) renewable energy by 2022, but it set a sluggish target of 60 GW for the high-potential wind sector. Domestic wind sector was already mature by this time with an installed capacity of 25 GW. To achieve MNRE’s target, wind industry had to make annual addition of only about 5 GW over seven years. But attaining even this small success seems a far cry.

At present, India has installed capacity of 37 GW with 13-GW projects in the pipeline and another 10 GW to be tendered. But annual additions have already fallen from 5.5 GW in 2016-17 to less than 2 GW now. A 2019 estimate by CRISIL, global analytical firm that provides ratings, research and policy advisory services, shows installations will reach only 45 GW by March 2022.

The prime reason for this is the waning interest of project developers in the sector. Until 2016-17, the key incentives for them were tax benefits through Accelerated Depreciation and Generation-Based Incentive. Feed-in-tariff at this time was Rs 5-6 per unit. Competitive bidding gained ground after the model found success in the solar sector — it reduced tariffs. The model initially increased vigour in the wind sector and tariffs dropped drastically, the lowest being Rs 2.43 in December 2017. But it was not sustainable. Worse, government set upper limits on power tariffs. Soon, interests started diminishing.

“The payback period for projects has increased from seven to eight years earlier to 12 to 13 years now,” says Manish K Singh, secretary-general of Indian Wind Energy Association. Developers are now withdrawing from making huge investments. “There was a paradigm shift in the business model for which wind industry was not ready,” adds Sunil Jain, chief executive officer and executive director, Hero Future Energies, a wind and solar power producing company.

Aggressive bidding on tariffs by big private players drives smaller players away, he says. Even announced tenders are getting disappointing response. In 2019, the government floated tenders for 8.8 GW, but could award only 3.5 GW.

They also lose out because of the variable and seasonal nature of wind. The government has accorded the industry with “must-run” status, but it operates with power generation curtailment risk. The sector gets little help from the government in acquisition of land for setting up projects and developing network for the evacuation of power from the plant to the grid.

“India has competency in on-shore wind turbine manufacturing, but the sector has been strangulated,” says Rajsekhar Budhavarapu of Indian Wind Power Association. From nearly 20 manufacturers operating in 2016-17, only a few survive now. Even the home-grown Suzlon Group, accounting for 35 per cent of existing installations, is on the brink of bankruptcy.

“Policy corrections are required to allow the industry to reach its potential of being the Southeast Asian manufacturing hub. This includes offshore wind turbines where India alone has a 30-GW target by 2030,” says Budhavarapu.

“Wind power development should be encouraged. The current situation is leading to under-use of a natural resource when the entire supply chain is ready and indigenous,” Singh points out.

The laggard wind sector can get a boost if the government makes efforts to re-power old plants, encourage hybrid parks and make investments in offshore wind farms. India has the potential to add 10 GW by re-powering wind farms that currently occupy high wind sites but employ low capacity turbines.

But this requires development of a new wind energy ecosystem. Budhavarapu contends the government should push for wind and solar hybrid parks. “Solar parks require Rs 12,000- Rs 14,000 crore of tax payers’ money for the construction of dedicated power evacuation network, that remain utilised from sunset to sunrise.”

Similarly, offshore wind is a cherished avenue with its high-speed, steadiness and year-round availability. Gujarat and Tamil Nadu have high potential for offshore wind energy generation. “Groundwork is being laid for the segment’s growth, which presently remains constricted by high tariffs. Private sector has now shown its willingness to set up offshore projects,” says Bhanu Pratap Yadav, joint secretary, MNRE.

Of all the electricity generation methods, wind has the lowest life-cycle greenhouse gas emissions due to its lower land and water footprint. It is one-third compared to solar photo-voltaic. Also, wind utilises power evacuation infrastructure almost twice as efficiently.

If India utilises all its wind sources, it has the potential to install 695 GW. Achieving the 60-GW target, therefore, is not a difficult proposition. But for this, the sector must get its due, says Balawant Joshi, managing director of Delhi-based consultancy firm Idam Infra. Growth of the sector hinges closely on how policies are changed and how effectively risks are mitigated.