Renewable energy, along with affordable battery storage, is set to usher in energy democracy in India 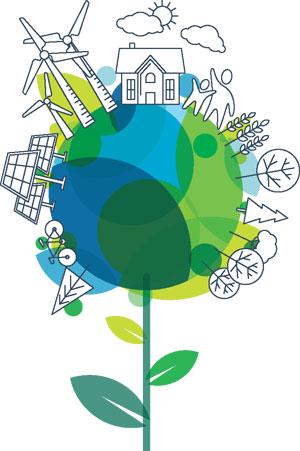 What would be the energy scenario in India, say 25 years from now? This is a scholarly question as well as a political enquiry because the answer would determine the country’s growth, development and environmental sustainability. But before gazing into the crystal ball, let’s analyse some of the emerging trends in the sector.

In April this year, the tariff of utility-connected large solar power projects in India hit a record low of Rs 3/kWh. This is same as the average tariff of coal-based power. In fact, at this tariff, solar plants are cheaper than a large number of new and old coal-fired power plants in India. In the past six years, the tariff of utility-connected solar power in India has reduced annually by 20 per cent. The International Renewable Energy Agency (IRENA) says that by 2025 the global average cost of energy (or LCOE) of solar photovoltaic (PV) system could fall by 59 per cent from the 2015 levels. Even if the tariff of large solar projects reduces by 5 per cent annually in India between now and 2020 (lower than IRENA’s prediction), the prices of coal-based power will start competing with the daytime prices of solar power from 2020 onwards. This means in 2020, solar plants would be the cheapest source of electricity during the daytime.

Wind power tariff also shows a downward trend. In the latest auction of 1 gigawatt wind power, the tariff hit a record low of Rs 3.46/kWh. This is cheaper than the power generated from imported coal. By 2025, the global average cost of onshore wind power is projected to fall further by a quarter from the 2015 levels, making it cheaper than coal-based power.

Now, as if to complement the solar and wind power sectors, lithiumion battery prices have also tanked by over 50 per cent since 2010. If the trend continues, the global average cost of electricity storage could fall by 70-80 per cent and reach Rs 3.0-4.0/kWh by 2025. At this cost, utility-scale electricity storage would become techno-economically viable, and storage can act as a large base load power plant (which generates power to satisfy the minimum demand) as well as a peaking power plant (which generally runs when there is a high demand). Considering the potential of storage in stabilising the grid and providing peaking load, the first utility-scale power storage project of 1.25 MWh is being commissioned in Puducherry.

In fact, at such low storage cost, solar and wind would be the cheapest sources of energy, especially for high-paying consu mers like commercial and industrial users.

The automobile industry would use the low battery storage cost to its advantage and start making electric vehicles. At a time when air pollution has emerged as a major public health concern worldwide, there is a clear techno-economical limit to how much pollution can be controlled from internal combustion engines, especially in diesel vehicles. It’s a matter of time, maybe 10 years, before e-vehicles become the most dominant segment in passenger vehicles.

Induction cooking is emerging as the safest, cheapest, less polluting and the most efficient way of cooking. Today, a family can cook by spending Rs 20/day on electricity. It would gain widespread acceptance once electricity-to-all becomes a reality. Going by these trends, we are staring at a future where renewable energy, efficient technologies and low battery storage cost will alter the way we produce and consume energy and redesign energy infrastructure.

In the 2040s, renewable energy would be the dominant source of energy in India. Over 80 per cent of the country’s installed capacity would be based on non-fossil fuels. Coal- and gas-based power plants would still be there, but their roles would be limited to providing the balancing power to offset the variability of renewable energy.

I say this because when compared with a solar or wind power plant, it would be expensive to set up a coal power plant post 2030. India, therefore, would not install any new coal power plant after 2030. The consumption of coal in the power sector is also likely to peak by 2030.

As renewable energy becomes cheaper, rich domestic consumers and commercial and industrial consumers would start moving out of distribution companies, or DISCOMS. This will make DISCOMS even more unviable. By 2030, they would be unbundled into the Distribution Network Operator (DNO), whose job would be to plan, maintain and operate the distribution network, and the supplier of electricity, which will pay DNOs for the use of infra structure. In this arrangement, the consu mers will have a choice to buy electricity from whoever they wish.

Smart grids would become common and the distribution network will become bi-directional. There will be millions of prosumers (producers-consumers) who would produce electricity using solar roof- tops and feed the excess to the distribution grids. Virtual power companies, with no asset of their own, would come into being. They would collect power generated from individual rooftops and renewable power plants and sell to other consumers. This will be the “Uber model” in the electricity sector. Companies would also emerge to install big utility-scale electricity storage devices and provide electricity to the grid for balancing, peaking and even base load requirement.

Since e-vehicles would be the biggest segment of the automobile sector, petrol pumps would get transformed into electric power charging companies where batteries would get charged in less than 10 minutes.

The country would have millions of solar houses, which would generate enough electricity to meet their energy require ments, including powering vehicles. The grid would act only as a backup for millions of consumers. It would also be a world of Watts, not kilowatts, as highly efficient appliances would be the norm.

But what would happen to the poor—the 300 million people who don’t have access to electricity and the 700 million who cook using polluting fuels? Firstly, in 2040 everyone in India will have access to electricity. Secondly, renewable energy would be the cheapest source of energy. Thirdly, the government would fix higher charges for the rich for using the grid and the distribution network, and use the money to subsidise distribution operations. Lastly, the government can continue to provide direct subsidies to the poor for certain minimum amount of electricity as it does today. So, by the 2040s, energy poverty in India would be a history.