At least 747 households in 150 villages of Valsad district have linked their toilets with biogas units. Studies show a toilet-linked biogas unit generates 25 to 31 per cent more biogas than the cattle dung-based ones. Photos: Vikas Choudhary

It's difficult to fathom how a sloppy administration can at times hinder the very social changes that are at the heart of government policies. Till two years ago, a group of activists in Gujarat’s Valsad district were mobilising people for generating biogas from human excreta.

The initiative had the potential to put back on track two of the Union government’s flagship programmes: Swachh Bharat Mission (SBM), which has given rise to concerns over safe management of faecal sludge, and the Ujjwala Yojana, which is losing steam due to pricey LPG refills.

The activists knew from the beginning that the initiative would face resistance due to the taboo associated with human faeces. But they were not prepared for what transpired on the ground, forcing them to abandon a project that had started providing basic amenities to people living below the poverty line.

“Toilet-linked biogas (TLBG) has saved me from disgrace and brought me comfort,” says Manjuben Patel, 60-year-old resident of Vegam village. She got the TLBG unit installed five years ago after the joint family of her deceased husband decided to divide the ancestral property. Manjuben and her two sons inherited three cows and a room next to the farm. The only household toilet went to her brother-in-law’s family.

“I did not have money to build a toilet. Going to the fields for morning ablution was our only choice,” she says. That’s when a team from Vasudhara Dairy came to her rescue. The milk cooperative promotes safe sanitation and biogas in villages from where it procures milk. Since 2013, it has been promoting TLBG along with Lucknow-based FINISH (Financial Inclusion improves Sanitation & Health) Society.

The team offered her a simple and economically viable solution: Build a toilet but do not build the twin pits or septic tank. Instead, connect the toilet to a biogas plant using PVC pipe. Place the digester at a lower elevation, or simply under the ground, so that the faecal slurry directly flows into it. Add cattle dung, water and kitchen waste to it regularly, churn the mixture for about half-an-hour daily and get cooking gas for free.

The team also helped Manjuben secure funds for setting up the unit. “A TLBG unit includes a toilet and a biogas digester, and costs Rs 32,000. Of this, Rs 18,000 is provided by the Union Ministry of New and Renewable Energy (MNRE) and its state nodal agency as biogas subsidy. Beneficiaries raise Rs 9,100 by participating in the construction work under the Mahatma Gandhi National Rural Employment Guarantee Scheme,” says Rangi Khengar, then development consultant at FINISH.

Till the launch of SBM in 2014, beneficiaries also received Rs 4,500 as subsidy for constructing toilets under the Nirmal Bharat Abhiyan. This used to cover almost the entire cost of setting up the unit, he adds.

Usually, a digester with a capacity of 2 cubic metres (cu m), or 2,000 litres, is recommended for a family of five to seven people. Once installed, it takes about a month to get filled and for the bacteria present in the waste matter to convert the organic compounds into biogas. After that, one can harness the gas every day. Though the amount of biogas produced depends on the number of toilet users, a TLBG unit generates 1.5 to 2 cu m biogas a day or 60 cu m a month.

This is equivalent to two regular sized LPG cylinders, 37 litres of kerosene, 88 kg of charcoal or 210 kg of firewood. In fact, a study by FINISH shows that a TLBG unit generates 25 to 31 per cent more gas than a non-TLBG one. It attributes the higher generation to high calorific value of human waste and the presence of a few unique bacteria, such as the hydrolytic and acetogenic bacteria, in it. Besides, says Khengar, a TLBG unit helps cut the expenses involved in setting up septic tanks or twin pits. 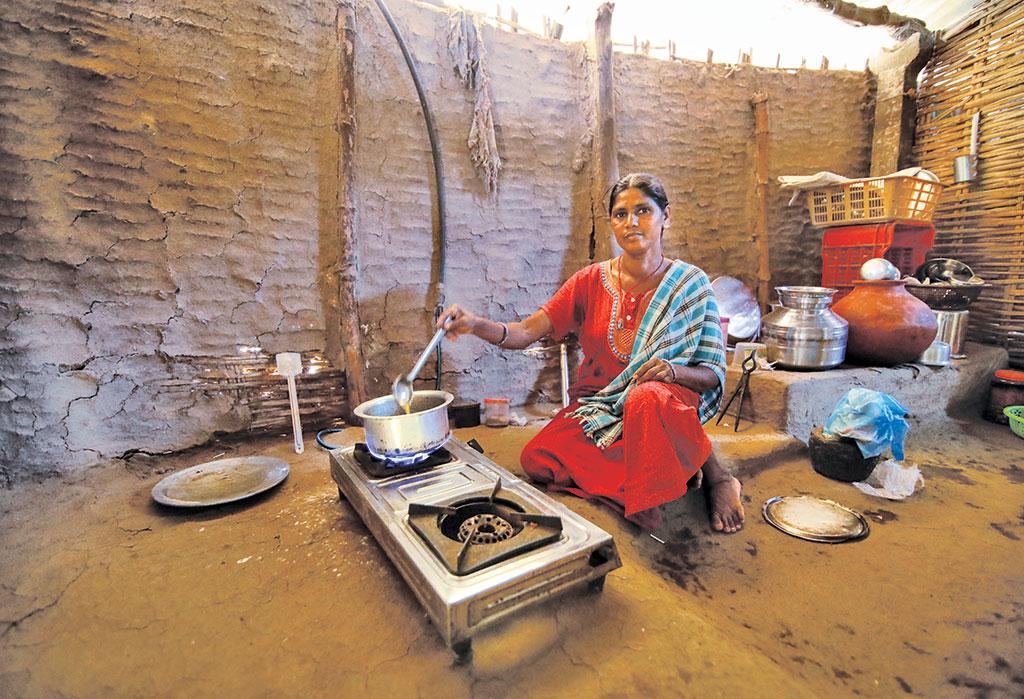 BUT CONVINCING COMMUNITIES about economic viability of TLBG was an uphill task. Most people in the region are engaged in agriculture and dairy farming. They already had biogas units with cattle waste as the sole feedstock. Few agreed to link the units with toilets.

“Some feared that the digester, if linked to toilets, would emit foul smelling gas. Then there were those who did not want to cook on gas generated from human faeces,” says Dayabhai Patel, a mason engaged in constructing the units. Several people outrightly rejected the idea due to the taboo associated with human excreta.

In a few cases where the team could convince people, the place suitable for biogas plant—it should not be under a tree or shade—was away from the toilet, making it difficult to link them.

“Within a few months, we realised that it was not possible to link the existing toilets with new biogas plants,” recalls Sureshbhai N Desai of Vasudhara Dairy. To overcome the obstacle, the team approached families who were still practising open defecation.

“We started spreading awareness on the need to build toilets. We also used psychological tactics. The demand for dung-based biogas plants is high in Valsad. Since we are the only agency in the region that facilitates construction of biogas plants and distribution of biogas subsidy, we accepted applications from those people who agreed to link the plants to toilets,” Desai says. This had a huge impact. Till 2015, at least 747 families in 150 villages of Valsad had installed TLBG. “I have not gone out to collect firewood since we got TLBG,” says Gitaben Chaniyabhai Bhagariya of Karenjveri village.

But she is from the last few households in Valsad to have benefitted from TLBG. “Around 2015, SBM started gaining momentum. This served a blow to our cam paign,” says Khengar. Of the five technologies recom mended under SBM for household on-site sanitation, TLBG is promoted as the most suitable technology for “all hydro-geological conditions”. SBM’s Handbook on Technical Options for on-Site Sanitation goes on to say that “generation and utilisation of biogas from human excreta and other wastes has three major advantages—it improves sanitation, gives bio-energy at low cost and provides better quality of manure for agriculture purposes”.

Plant nutrients in the biogas slurry is high compared to compost and can be “directly used for agriculture purpose”, notes the document. MNRE also promotes TLBG and offers an additional subsidy of Rs 1,200 for it. “But officials invariably promote twin pits under SBM. At Valsad, officials were not even aware of TLBG. We tried explaining to them the benefits of TLBG over other technologies, but it fell on deaf ears,” Khengar says. “As people could build toilets by availing Rs 12,000 subsidy under SBM, our strategy to link it with biogas fizzled out,” adds Desai.

A CRUEL FINAL blow came from the Gujarat Agro Industries Corporation (GAIC), the nodal agency responsible for implementing the National Biogas and Manure Management Programme and disbursing biogas subsidy in the state.

“In 2017, GAIC discontinued disbursing subsidies citing non-availability of staff and confusion over departmental responsibility,” says Khengar. “We have some 800 pending requests for biogas plants, 20 per cent of which are for TLBG,” says Desai. “Since neither GAIC nor MNRE is able to tell us when the subsidies would resume, we are providing loans up to Rs 25,000 at a 9 per cent interest rate.”

It’s time the government stopped dragging its feet over TLBG, says Saurabh Agnihotri, national head of projects at FINISH. To achieve open defecation-free India by October 2019, officials are constructing toilets and pits at a breakneck speed without paying much attention to the details.

In areas where water table is high, these pits are getting flooded. In houses where the pits are getting filled, people are employing manual scavengers to dump faecal sludge in open drains or landfill sites. This sanitation nightmare can end only if people are made aware of TLBG and the administration makes an effort to implement it, he adds.

The government already has a similar scheme under SBM, called Gobar Dhan. It promotes biogas from cattle dung and agricultural waste as a way to achieve cleanliness. The need is to expand its scope to include human excreta.

(This article was first published in Down To Earth's print edition dated June 1-15, 2019)