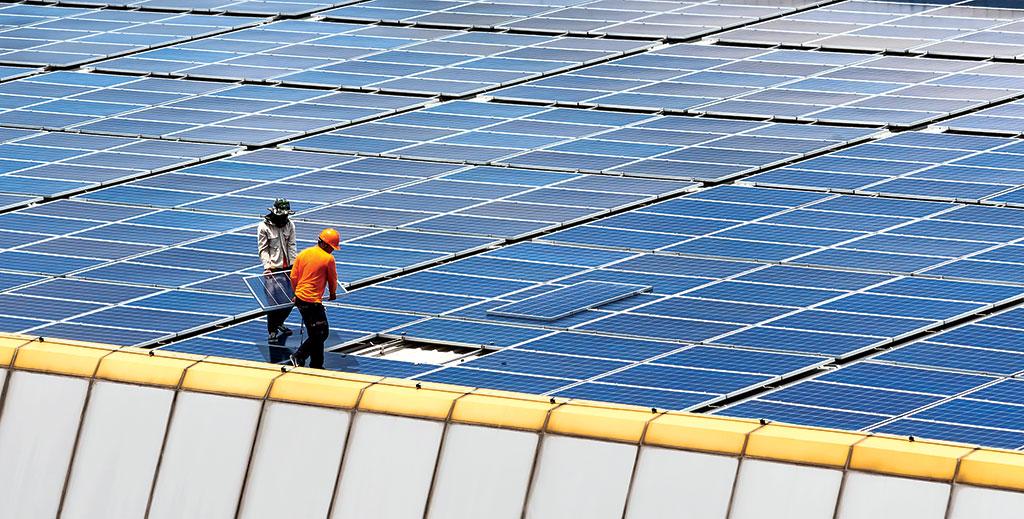 India targets 100 GW of solar power by 2022. It has already installed 31 GW, 17 GW capacity is under construction and tenders for 35 GW have been floated

Of the country’s target of installing 175 GW renewables capacity by 2022, solar energy has the biggest chunk of 100 GW. Since 2015, when the Union Ministry of New and Renewable Energy (MNRE) announced its renewables target, the sector did quite well.

India has installed 31 GW of solar capacity, 17 GW is under construction and tenders for 35 GW have been floated. However, the sector has witnessed a lull in recent months.

Power distribution companies (discoms), which mostly are owned by state governments, have been delaying payments to plants supplying solar power. As of July 2019, discoms owed Rs 9,736 crore to solar power producers in the country, with Andhra Pradesh, Tamil Nadu, Telangana and Karnataka accounting for 75 per cent of the dues.

“If we don’t get paid for power generation, the existing capital will go towards servicing bank loans of operational plants, instead of getting invested in new ones,” said Sunil Jain, CEO and executive director of Delhi-based Hero Future Energies.

The delay has had a major impact on investor sentiment. Public and private sector banks too are reluctant to lend. “Banks are not in the mood to fund, conditions to borrow from Centre-owned financial institutions like the Indian Renewable Energy Development Agency Ltd and the Power Finance Corporation, are not conducive and foreign funds are difficult under current regulations,” Jain claimed.

Overall, the large-scale solar sector requires Rs 1,20,000 crore investment to meet its 60 GW large-scale capacity instalment. (The remaining 40 GW is to be met by rooftop installations.)

The other major reason for the slowdown is solar plants’ inability to run at full capacity. This is happening because discoms prefer to buy power from cheaper sources.

In Andhra Pradesh, for instance, the power production from solar plants curtailed by as much as 70 per cent on certain days in June 2019, shows data by the National Solar Energy Federation of India (NSEFI), an industry body representing developers and manufacturers.

This despite the Union government’s assurance that power produced by solar plants will be bought even if it is costlier. The result is a lowered earning for solar plants.

Another reason for the slump is governments’ insistence that plants sell power to dicoms at unreasonably low tariffs. This trend began in 2017 after Rajasthan received a bid of Rs 2.44 per unit for the Bhadla Solar Park of Jodhpur.

That set the bar low and all states now expect extremely low tariffs, though operational costs there might be higher than they are at Bhadla. “Lower tariffs require a near perfect scenario where execution, collection and generation risks are minimal,” said Arul Shanmugasundram, chief executive of Mumbai-based Tata Power Solar.

The downward trigger for the sector was the introduction of the goods and services tax (GST) in 2017. Since many projects predated the tax, and the tariffs that project developers quoted while applying for the tenders were calculated without taking the tax into account, GST became an additional burden and turned the projects unviable.

The Centre asked the project developers to pay the tax and assured them reimbursement. This did not happen.

“Between 2017 and mid-2019, the industry paid Rs 8,000 crore in GST. But state governments refused to pay and instead approached the Appellate Tribunal For Electricity. We are now requesting the Centre for reimbursement,” said Manoj Upadhyay, founder and managing director, ACME Solar, a Gurugram-based firm.

Firms also said the government has framed the tax irrationally. “They tax solar projects assuming 30 per cent of our cost is ‘services’ and 70 per cent is ‘goods’. But ‘services’ are just 10 per cent of what we do,” said Subrahmanyam Pulipaka, CEO, NSEFI. His argument could be driven by the higher tax the government levies on services (18 per cent) than goods (5 per cent). Still, GST has created complications.

In 2018, India also imposed a 25 per cent duty on import of solar cells and modules. This was done to give a boost to domestic manufacturers, but it only increased project costs.

“Policies have to be tweaked to keep pace with the changing environment. What remains stable is our commitment to increasing renewable energy’s share [in India’s total energy mix]. Also, we are clear that changes will not be introduced retrospectively, and mitigated through special clauses of force majeure, whenever needed,” said PC Maithani, a scientist with MNRE, explaining the government perspective.

But such policy changes have resulted in loss of confidence among project developers and investors.

The effects of such fickle policy moves have begun to show. Of the total 63.9 GW solar and wind capacity for which tenders were floated in 2018-19, 31 per cent was cancelled, 26 per cent under-subscribed, 10 per cent delayed and only 34 per cent auctioned for development, states a September 2019 report by Mumbai-based analytics firm Crisil. T

he report also estimates that India will only be able to install 59 GW of solar capacity by 2022. The government did refute the findings in a press release on October 10, but the trends hint otherwise.