The tariff of less than $0.04 per kWh shows that globally-competitive low tariffs are possible in Sub-Saharan Africa

A recently concluded competitive award of solar power capacity in Zambia has yielded a $0.04 per kilowatt-hour (kWh) tariff, which is on par with tariffs discovered in bids conducted in leading solar markets like India and a new record for Africa.

The Government of Zambia, under its ‘GET FiT’ programme to facilitate private investments in renewable energy projects, has awarded six projects of 20 megawatt (MW) each, including two projects at $0.039 kWh, another two at $0.45 per kWh, and the remaining two at $0.048 per kWh. The initial call for bids was only for 100 MW of capacity, but the government decided to award another 20 MW given the high investor interest. This was the largest solar tender auctioned in sub-Saharan Africa outside of South Africa.

Significantly, these low tariffs have been achieved without any funding grant or concessional finance for project development, despite the GET FiT programme being a partnership between Zambia’s Department of Energy and the German Development Bank KfW.

Further, developers were required to find and acquire project land on their own, pay for the initial evacuation infrastructure, and meet stringent technical criteria including compliance to the International Finance Corporation's Environmental and Social Performance Standards and timely project implementation.

What the bidders were provided was access to competitive finance to ensure short-term liquidity to back the Zambia Electricity Supply Corp's offtake commitment under the signed power purchase agreements.

For solar power projects, competitive bidding has become a norm globally which has enabled multi-fold decline in solar Photo Voltaic or PV prices. In India, for instance, solar tariffs have declined six to seven times over the past decade — from Rs 13-14 per kWh to Rs 2.5-3 per kWh — primarily due to tendering of large capacities under various central and state government programmes/policies. Globally, the dominance of competitive bids is projected to continue, as Bloomberg New Energy Finance estimates 80 per cent of future solar capacities would come up through this route.

As for sub-Saharan Africa, South Africa, under its Renewable Energy Independent Power Producer Procurement (REIPPP) programme has been consistently issuing tenders for renewable capacity allocation, aggregating almost 4 gigawatt since 2011. This has helped solar power tariffs in the country to decline from $0.20 per kWh (bid cap for REIPPP Round I-2011) to $0.07-0.08 per kWh (27 solar projects awarded in 2018).

The region outside of South Africa has not gained much from the global decline in solar energy prices. Small demand within countries limits opportunities for economies of scale. The institutional capacity and capability is limited and there is little competition in local markets. Also, the transaction costs are high, and the perceived investment risks are even higher.

Despite the limitations, some countries like Zambia, Uganda and Senegal have managed to produce positive results with the support of development bank programmes such as KfW’s GET FiT and World Bank’s Scaling Solar project. 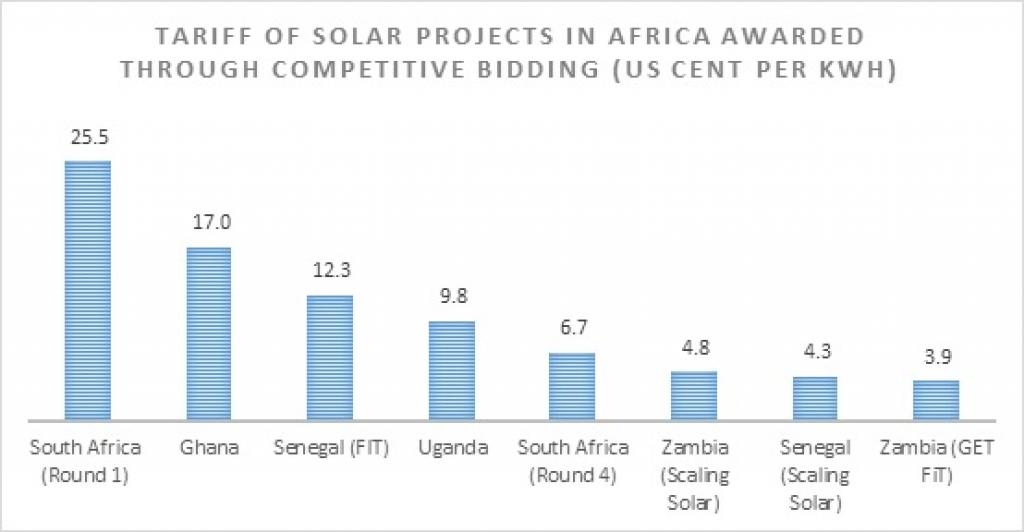 What sets the recent Zambia auction apart from past projects is that the low tariffs have been achieved without concessional funding for capex and land acquisition support. As explained by Marco Freitag of KfW, these results have been backed by bankable standardised transaction agreements, effective tender implementation, and steadfast commitment of the national government and utility.

While the experience with future competitive auctions in other countries may vary, the crucial lesson from the Zambian experience is that globally competitive low tariffs are possible in sub-Saharan Africa even without concessional finance as long as adequate risk mitigation efforts are made.

Also, African countries must update their assumptions for cost of solar power development in their national power plans to reflect new realities. It is alarming, for instance, that Tanzania assumes in its Power System Master plan, an extremely high solar project development cost (nearly $4 million per MW — eight times higher than India’s), due to which it allocates only a marginal role of 5 per cent to renewables in its least cost generation expansion path.

Africa receives some of the highest levels of annual solar radiation globally, which can be an ideal solution to overcome its energy poverty. It is high time that governments across the continent take cues from the Zambian experience and start making concerted efforts towards solar power development.