Will file an affidavit in Supreme Court, seeking review of guidelines that call for phasing out tourism from core tiger habitats 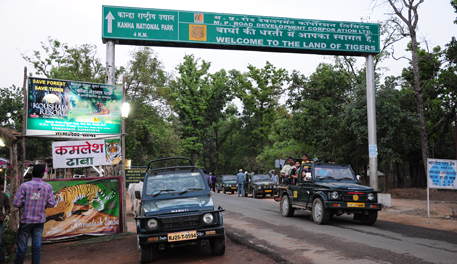 In a sudden change of stance on banning tourism in core tiger habitats of the country, the Union Ministry of Environment and Forests (MoEF) has sought a review of its own guidelines on the matter.

The guidelines that called for phasing out tourism from the core tiger habitats and imposing a conservation cess on tourist facilities were finalised by the ministry and presented before the Supreme Court only last month.

However, instead of letting the court hear the comments of the stakeholders and issue final directions on the said guidelines, the ministry now wants to review them. In an affidavit to be filed on August 22, the ministry contends that the guidelines “require further review based on more consultation with all stakeholders, including state governments and representatives of local indigenous communities.”

“The states have expressed concern that many local people depend on tourism for their livelihood and hence stopping tourism in core areas of tiger reserve would result in loss of such income, leading to discontent which may be a threat to wildlife and forests. Besides, the common citizen would be deprived of an opportunity to appreciate our natural heritage,” adds the affidavit. The ministry has also requested the court that it should be allowed to “further review the guidelines” and “conduct more consultation.”

Tourism in tiger reserves has been thriving for years now without any regulations. On the other hand, the ministry has been going back and forth over the guidelines for regulating tourism. The first draft guidelines were issued by former environment minister Jairam Ramesh in June last year. However, they were not finalised for more than a year until the court directed the ministry to do so.

The guidelines presented to the court on July 9 did not ask for an outright ban on tiger tourism but called for phasing out tourism from the core tiger habitats in five years. The report called for allowing community-based tourism in parts of the core area as an interim measure to ensure livelihood for communities. “In recent years, the mushrooming of tourist facilities around protected areas has led to the exploitation, degradation, disturbance and misuse of fragile ecosystems. It has also led to misuse of the term eco-tourism, often to the detriment of the ecosystem, and towards further alienation of local people and communities,” read the guidelines finalised by the ministry. An affidavit filed by the ministry in October in response to Prayatna’s petition last year had also said that the core areas should be kept inviolate from all kinds of human disturbances including tourism.

“It is surprising that instead of defending the guidelines, the ministry is backtracking on its stance. This makes it clear that it has given in to the pressure of tourism lobby,” says a lawyer associated with the case who did not wish to be named.

In fact, the pressure to allow tourism in the core areas of tiger reserves had been building up after the apex court put a temporary ban on it. The tourism industry and the state governments that earn huge revenues from it had been lobbying extensively with the top brass in the UPA-led government to push their case. For instance, on July 27, Rajasthan forest, environment and tourism minister Bina Kak wrote a letter to UPA chairperson Sonia Gandhi asking her to direct the ministry to pursue the case for tourism to be allowed in tiger reserves. Meanwhile, Madhya Pradesh Chief Minister Shivraj Singh Chauhan reportedly met the Union environment minister Jayanthi Natrajan to push for allowing tiger tourism. A well-known tiger activist has also written to the Prime Minister’s Office seeking a review of the guidelines.

But while the fight for the share of pie in tiger tourism continues, it is the forest dwellers who have suffered the collateral damage. On April 3, the Supreme Court had ordered all states to notify buffer zones around tiger reserves under their jurisdiction within three months. The states which missed the deadline were given time three weeks more by the court on July 24.

Tribal rights activists have pointed out that in the haste to comply with the court directives the buffer zones in a few reserves have been randomly notified by the states without consulting the communities as required by law. Non-profit Kalpavriksh has even filed an intervention appeal in the court last week for the review of buffer zone notification order. The environment ministry has also appealed to the court in its affidavit that it should be allowed to review the notification.

The court will hear all these appeals on August 22.