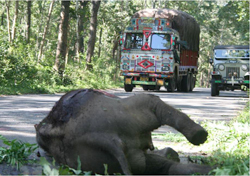 The Union Ministry of Environment and Forests is considering moving court to vacate the ban on night time traffic on the two national highways passing through the Bandipur tiger reserve in Karnataka.

About 13 km of national highway (NH) 212 and 20 km of NH 67 that connect Karnataka with neighbouring Kerala pass through the core area of the reserve. The Karnataka High Court had banned traffic between 9 pm and 6 am on these stretches of roads in March last year following reports of wild animals being run over by vehicles. The court, on the basis of evidence produced by the Karnataka forest department, observed that wild animals, including tigers and elephants, are getting regularly killed in road accidents and that sound and light disturbance was driving the animals out of the forests, leading to man-animal conflict.

MoEF, however, seems to be bent on getting this well-reasoned order scrapped. In a letter to the chief wildlife warden of Karnataka, dated September 26, the ministry has asked the ste to prove that the ban on night traffic on the two roads is “in public interest as well as wildlife conservation”. It said it might take up the matter with the Supreme Court to restore traffic movement.

The Bandipur reserve is one of the first national parks in India and has the highest tiger density anywhere in the world. It has also been declared as an important area for  elephant conservation.