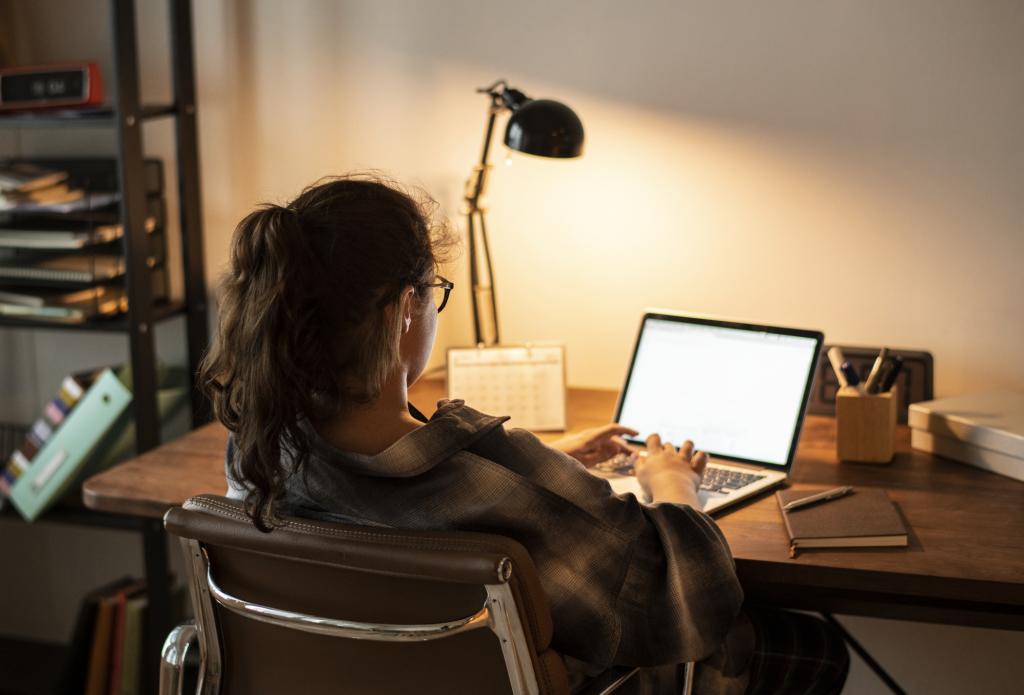 Here is a reason you may consider switching off your webcam during the next virtual meeting: It’s good for the environment.

An hour of videoconferencing can emit up to 157 grams of carbon dioxide equivalent (co2e) — enough to power a car for 2 kilometres — requires almost 2 litres of water and demands a land area adding up to about half the size of an iPhone, claims a new study published in the journal Resources, Conservation & Recycling. Leaving the camera off can reduce the footprint of the virtual meeting by 96 per cent.

CO2e is a standard unit to express the impact of each different greenhouse gas, such as methane or nitrous oxide in terms of the amount of CO2 that would create the same amount of warming.

The study The overlooked environmental footprint of increasing internet use, calculated water, land and carbon footprint together to drive home a simple point: The sudden surge in the use of internet during the novel coronavirus disease (COVID-19) pandemic could seriously offset environmental gains of working from home.

“Carbon footprint is one of the well-known metrics for evaluating the environmental cost of our services and products. But emitting greenhouse gases is not the only damage that we must worry about. There are two other major environmental footprints, water footprint and land footprint that inform us about the environmental implications of our actions and choices. What happens to our water and land are also important when it comes to sustainable development and coping with climate change,” said Roshanak Nateghi, co-author and a professor at the Purdue University, US.

The researchers from Purdue University, Yale University and the Massachusetts Institute of Technology base their findings on the fact that data processing and transmission uses a lot of electricity, and electricity production has carbon, water and land costs.

Taking the median carbon footprint for the world (32 g CO2e per GB), data storage and transmission emit 97 million tonnes of CO2e a year — roughly equivalent to the annual carbon footprint of Sweden and Finland combined. Similarly, the median global water footprint of Internet use is estimated to be 2.6 trillion litres of water or the equivalent of filling over 1 million Olympic-size swimming pools. Finally, the median land footprint of Internet use is approximately 3,400 square kilometres of land, representing the combined size of Mexico City, Rio de Janeiro and New York City. 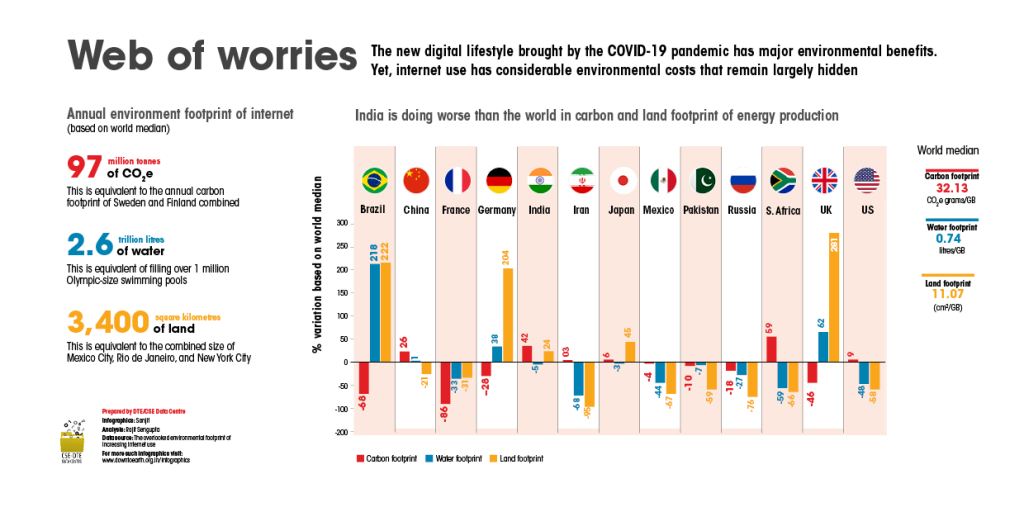 Globally, processing and transmitting internet data has a carbon footprint ranging 28-63 g CO2e per gigabyte (GB). Its water and land footprints range from 0.1-35 litre per GB and 0.7-20 cm2 per GB, respectively.

India, the researchers found, has carbon and land footprints that are 42 per cent and 24 per cent higher than the world median, respectively, but water footprint that is 5 per cent lower. The country’s numbers are worrying. “India needs to take serious actions for changing its sources of energy and methods of energy production in order to reduce its carbon, water, and land footprints,” says Nateghi.

In Brazil, the carbon footprint of internet transmission is 68 per cent lower than the world median, but water and land footprints are 218 and 222 per cent higher. Germany shows a trend similar to that of Brazil.

“Society at large should recognise the power of collective action in reducing the environmental footprint of the Internet to avoid paving an irreversible path to an unsustainable digital world,” says the paper as it calls for small sacrifices such as “turning off video during a virtual meeting, reducing the quality of streaming services, decreasing gaming time, limiting time on social media, deleting emails and unnecessary content on the cloud-based storage services, or unsubscribing from email lists can significantly reduce the environmental footprints of Internet use”.

Popular streaming services such as Youtube or Netflix require 7 GB per hour of streaming in high video quality (Ultra HD or 4k) which translates to a carbon footprint of 441 g CO2e/hr. Streaming videos at this quality for four hours a day would result in a monthly carbon footprint of 53 kg CO2e.

However, by lowering the video quality from HD to standard, the monthly footprint would drop to 2.5 kg CO2e, saving the emissions of driving a car from Mumbai to Pune (150 kilometres). If 70 million streaming subscribers were to lower the video quality of their streaming services, there would be a monthly reduction in 3.5 million tonnes of CO2e — the equivalent of eliminating 1.7 million tonne of coal, or approximately 6 per cent of the total monthly coal consumption in the US, says the paper. 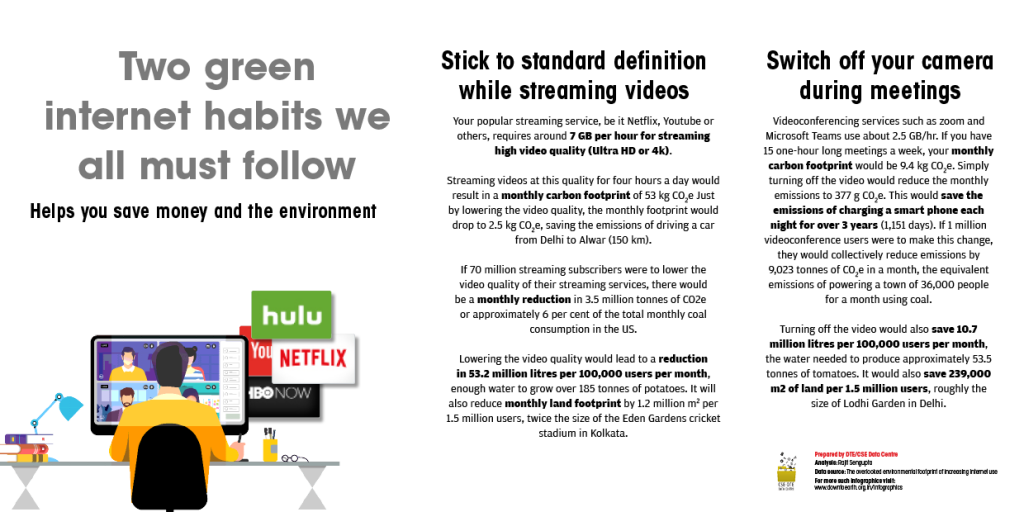