Residents from surrounding villages say the ash pond is filled above capacity, causing ash to flow into rivers

The National Green Tribunal’s eastern zone bench on Monday issued a show cause notice to Bakreshwar thermal power plant, asking why it should not be penalised for polluting the Chandrabhaga and Bakreshwar rivers in West Bengal.

The show cause notice, issued in response to a petition filed by environmental activist Subhas Datta, pulls up the plant authorities for not complying with the orders of the NGT. In March, the court had demanded that the plant complete remedial activities to compensate affected residents and clean the river bed before the monsoon season in June.

The court found, however, that measures initiated by the plant were inadequate. “The court ordered (the) plant to remove ash from the river bed. The plant lifted the ash and was dumping it on the river banks. Several directions were served but the plant was non-compliant. Ten days back, there was heavy downpour and ash from the plant’s pond has totally contaminated the river,” says Datta. 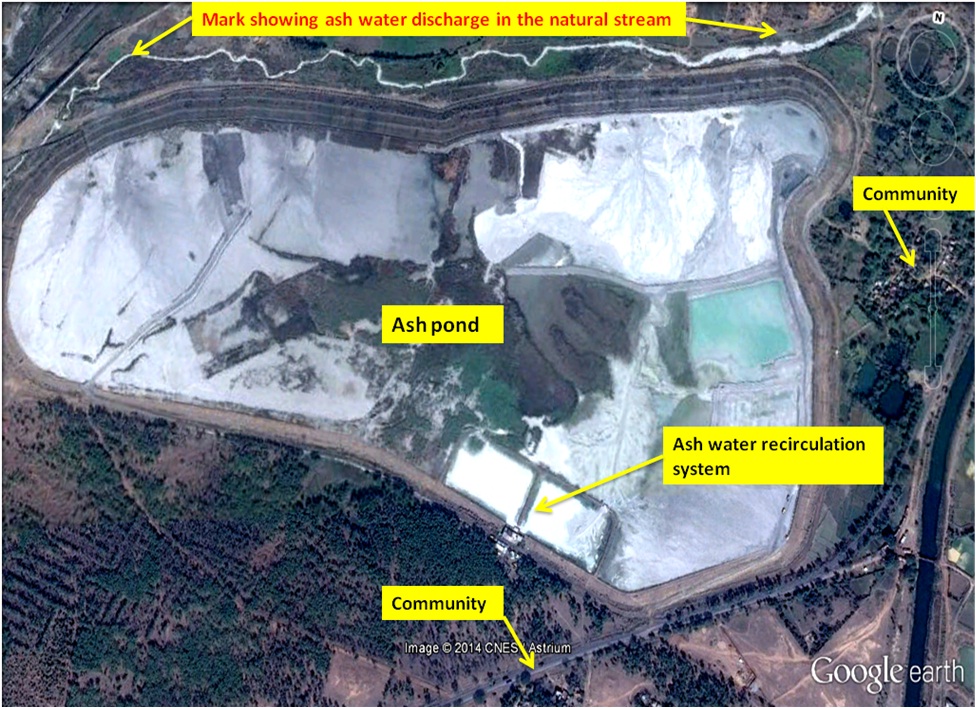 Hodla village, located behind the plant’s ash pond, is among the most severely affected villages. Residents complain of poor management of ash pond and overflow. Monir Mondal of Hodla says the overflow from the ash ponds is damaging standing crops in the monsoon.

Residents allege that plant authorities have turned a deaf ear to their complaints. In September last, a serious overflow caused the community to erupt in protest. This resulted in a petition being filed by Subhas Dutta.

“(When) the plant started operations in 2000 with three units of 210 MW, the life of the ash pond was estimated at 15 years. In 2008, the plant expanded without obtaining land for additional ash ponds and continued dumping huge quantities of ash. Thus, the pond got overfilled and ash laden water has been overflowing out of the pond into the river,” explains Datta.

Plant officials state that Hodla residents were offered rehabilitation in an alternate location at the time of construction of the ash pond, but the residents refused to move out. According to its environmental statement report of 2011-12, the plant claims its pond is large enough to store ash for the next 30 years. The plant has also reported over 100 per cent ash utilisation in 2011-12 and 2012-13 and 65 per cent utilisation in 2013-14 to the Central Electricity Authority. The primary mode of utilisation stated is filling of low-lying areas.

Avijit Sarkar, environmental engineer at Durgapur Regional Office of West Bengal Pollution Control Board (WBPCB), says, “The ash pond is a problem area for the plant. It is being dredged to allow for more ash disposal, as additional land acquisition will take a long time.”

Sisir Mondal, in-charge of Durgapur Regional Office, WBPCB, says that the plant uses unwashed coal from Eastern Coalfields Ltd (ECL), even though ECL has its own washery and can supply beneficiated coal. Washing is the process of removing ash from mined coal. Unwashed coal typically has 5 to 10 per cent more ash than washed coal. One of the fundamental question is, when law demands 100 percent utilisation of fly ash as bricks, cement, etc. why authorities raise non-availability of ash pond area a major issue.

The Bakreshwar plant has nearly 375 ha of land, of which the plant occupies 170 ha and the township 101 ha. The ash pond occupies about 104 ha and lies outside the boundary of the plant. On an average, the plant generates 2.02 million tonnes of ash per year.

The plant was rated one of the worst in India by the green rating project of Delhi-based Centre for Science and Environment (CSE). CSE’s green rating study of thermal power plants pointed out that the discharge of ash-laden water into rivers by coal power plants is one of the most serious environmental issues in the country. In fact, in his report to the tribunal, WBPCB Chairperson Kalyan Rudra says that discharging ash into the river affects river health, damages physical and chemical properties of the river and leads to extinction of biodiversity.

Though the environment ministry has been pushing for 100 per cent ash utilisation since 1999, the lack of concerted efforts and absence of monitoring authorities has meant that the goal is far from realisation. The next hearing of the case is on July 27.