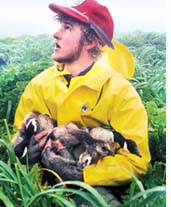 In a major legal action against a us federal agency, an environmental organisation has filed a notice of intent against the agency's political interference in protecting endangered species. At stake are 55 endangered species in 28 us states together with the restoration of around 3.5 million hectares of protected habitat. Federal law requires filing a notice of intent to sue before a lawsuit against a department can be instituted.

Tucson-based Center for Biological Diversity (cbd) filed the notice on August 28, accusing the us department of the interior of illegally removing one animal from the endangered-species list, refusing to put three animals on the list and plans to remove protection from seven others. These decisions, the group claims, were influenced by politics and not based on science.It claimed scientific documents were edited by government and university scientists, overruling other scientific experts and economic analyses. "It puts the Bush administration on trial for systematically squelching government scientists and installing a cadre of political hatchet men in positions of power," said Kieran Suckling, policy director of cbd. The suit includes species like the marbled murrelet, the western snowy plover and the Arctic grayling.