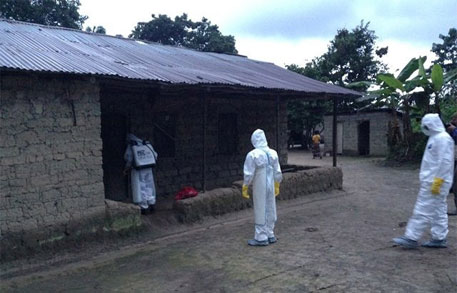 While the whole world waits for the researchers to successfully invent a vaccine against the deadly Ebola, the progress towards finding an effective treatment is being hampered by a few ethical concerns.

News reports suggest that two vaccines are currently being tested and Russia is working on another vaccine. Fujifilm Holdings which presently has an inventory of 20,000 courses of the treatment is preparing to manufacture up to 300,000 new courses. According to a Wall Street Journal report, it is one of several companies whose drugs have been evaluated as potential Ebola treatments.

The epidemic in four countries of West Africa has so far claimed the lives of over 4,500 people so far and nearly 9,000 have been affected by it. The World Health Organization (WHO) recently warned that Guinea, Liberia, and Sierra Leone could see as many as 10,000 new Ebola cases per week by year's end.

Biopharmaceutical company Chimerix, after approval from the Food and Drug Administration (USFDA) for emergency, used the drug Brincidofovir on Thomas Duncan, the first person known to have been diagnosed with the disease on the US soil. He, however, died later. Another company, Mapp Biopharmaceutical Inc, is developing its drug ZMapp that was given to the first American health workers who were brought from Africa to Atlanta for treatment in August. Both of them have recovered. The USFDA has also approved the use of the experimental TKM-Ebola drug to test on suspected cases of the infection. The drug is made by Tekmira Pharmaceuticals, a Canadian company.

Ethical issues
While trials are in progress and labs race to find a treatment, there are some ethical issues associated with them. The biggest of them, according to a US-based non-profit National Public Radio (NPR), is who gets a drug that is in scarce supply. "In a public health crisis, there are certain approaches. One is if we have only very small amounts of a drug, we might give it to people who can save other people, like health care workers and other first responders. You need to keep them alive," says NPR.
But the real success of the vaccines will be established only after they are able to produce immune response in volunteers. “Human trials, just starting on some vaccines, could also unveil unknown side effects, an unwelcome possibility for shots designed to be taken by people who may never be infected with Ebola. That’s why it’s imperative to cast a wide net in seeking a solution, says Matthias Schnell, a microbiologist at Thomas Jefferson University in Philadelphia, in a report by Bloomberg.

Lack of funds
Since 1976, there have been almost two dozen outbreaks of Ebola in about 10 countries in the central and eastern parts of Africa. Yet treatment has not moved beyond the experimental stage. What is it that has led to such a delay in producing a vaccine against a virus that can tear apart a body in just few days and has strains with fatality rates as high as 70 per cent?  What has stopped these companies from conducting clinical trials before?

A few researchers say there was not much interest or funds to study the disease that affected only the poor living in the hinterlands. This is for the first time the virus has afflicted those living in urban areas, including capital cities. This is also an unprecedented case of an Ebola outbreak crossing the borders of African continent. With delayed intervention and huge demand for funds, there is still no guarantee that enough money will be pooled into research even now as the majority of those affected by the virus are in Africa.

WHO, however, hopes to get the vaccines by January. “Large clinical trials that would put Ebola vaccines in the arms of thousands of West Africans may begin as early as January, depending on the outcome of small preliminary trials under way now or soon to start,” a WHO official said at a press conference on Wednesday.