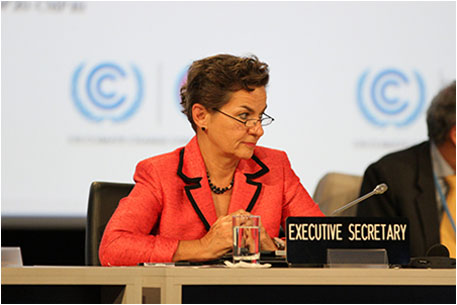 As the climate talks in Lima entered the crucial second week, the European Union has called for responsible actions from all countries to achieve a climate deal in Paris that will not only contain global warming to below 2°C but also create jobs and foster sustainable growth. To this end, it called for establishing a ‘Paris alliance’ to guarantee success of the new agreement.

Until now the US and China have been blocking the way, but it seems that they have started taking climate change more seriously, said a EU Parliament statement released on December 6, referring to the US-China climate deal just before the Lima climate summit. The EU statement came ahead of the visit of EU delegation of members of the European Parliament to Lima from December 8 to 12.

Terming China and the US as the “biggest world polluters”,  EU delegation vice-chair Jo Leinen said that the contribution of US and China will be very crucial for a responsible and ambitious climate policy.

The EU delegation of Members of the European Parliament (MEPs) chaired by Giovanni La Via intend to convince all parties and other stakeholders for taking responsible actions and moving towards implementing an ambitious climate policy.

According to European Parliament press release, EU is responsible and committed to the cause. In a resolution voted in November 2014, European Parliament had reiterated the EU commitment to getting on track for a below 2°C climate warming scenario. It had also called for raising European contributions to the Green Climate Fund. On November 5,  the EU Environment Committee adopted a motion for resolution on COP20, recommending that the new agreement aim at 50 per cent reduction in carbon emisions by 2050.

Now in Lima, too, the EU will try to convince all Parties and other stakeholders to agree and take actions for an ambitious climate policy, not just to save the planet but also for creating jobs and fostering sustainable growth, said La Via. EU claims to have achieved success on meeting EU targets for GHG emisssions, but demands äctions by other leading international stakeholders.

The EU delegation will meet Christina Figueres, executive secretary of UNFCCC, other key negotiators along with Parties from other parliaments. EU will also be meeting local and international NGO representatives.

On December 5, the EU along with Canada, the US, New Zealand and Australia had deleted detailed references in the draft text of the new agreement that relate to a review or a revisit of their existing commitments in the pre-2020 period, with the excuse that it was covered in the Warsaw agreement.

This document, released on November 11, is being discussed along with two other documents—non-paper on elements for a draft negotiating text   and an informal note   at the ongoing Lima climate conference. It focuses on how countries plan to raise ambition “pre-2020” in advance of the Paris agreement coming into effect.

Releasing these documents, Figueres, said that “Parties have agreed to adopt a new universal climate agreement in Paris in December 2015 to come into effect in 2020. They have also recognised the need to raise ambition up to 2020—one of the key outcomes in Lima needs to be a balanced and coherent draft agreement.

A WWF statement released in Lima, accused China of pushing back on creating a strong and transparent assessment of national climate contributions toward the new agreement due in Paris at the end of next year.