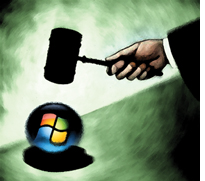 europe's second highest court has come down heavily on software giant Microsoft. In a landmark judgment on September 17, eu's Court of First Instance backed a 2004 decision to fine Microsoft and asked the software giant to change its Windows operating system for compatibility with rival systems.

In 2004, the European Commission had slapped a record Euro 497 million (us $613) fine on Microsoft for breach of anti-trust laws. The Redmond, Washington-based software biggie, had appealed to the court. This time, the court has upheld two key elements of the commission's verdict that Microsoft not be allowed to bundle in its Windows Media Player with Windows operating system, and it share communications protocols with rival software companies who want their machines to work with Windows computers in a workgroup. It also upheld the fine.The court sided with Microsoft on a minor issue and ruled that the commission's independent monitoring trustee charged with supervising Microsoft's behaviour had too large a remit to scrutinise it.

The court brushed aside Microsoft's contention that its intellectual property afforded it protection against European regulations against bundling, and that software companies because of their fast-moving nature be treated with a different hand. The ruling's immediate impact probably is negligible, as Microsoft had paid the fine years ago, and has been selling a version of Windows without Media Player. But the decision means that Europe has so far been more successful than the us in bringing Microsoft to book on anti-trust violations. In 2000, a us federal judge had called Microsoft untrustworthy and directed the company be broken up. But the decision was quickly overturned and the judge was admonished, on grounds extraneous to the case.

Regulators in the eu are now looking at the way Intel prices its micro chips and are keeping a close-eye on Google. The verdict has provoked concerns of overregulation.

us assistant attorney general Thomas Barnett warned that the Microsoft ruling, "rather than helping consumers, it may be harming them by chilling innovation and discouraging competition."

Microsoft representatives haven't commented on this. eu Competition Commissioner Neelie Kroes described the verdict as "bittersweet," saying that software customers still had no more choice than they did three years ago.