EU fishers up against dearer fuel 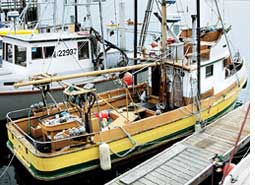 France and Scotland have initiated a negotiation with the eu for permission to give subsidies or release cash-aid for their ailing fishing sectors. To maintain a level commercial playing field, the European State Aid Rules do not allow member nations to introduce large-scale subsidies. Scotland has established a fuel task force to prepare a fuel efficiency scheme for the fishers, while France has promised to immediately release 110 million (us $173 million) in aid for the sector.

Despite assurances, French fishers resumed a blockade of oil depots near France's largest port of Marseille on May 22. They disrupted shipping in the English Channel and blocked deliveries at two refineries of oil giant Total SA, saying the government's pledges to unlock aid were not enough. Ignoring calls by their union leaders to return to work, protesting fishers insist the price of fuel must go down by almost half.

Belgian fishers, too, staged a demonstration on May 23 at the country's main fishing port, Zeebrugge, and warned that more action might come if their demands were not met. Spanish and Portuaguese fishers are asking for similar aid, as promised by France, and have threatened to go on a strike from June, if the governments don't come up with aid to cushion rising fuel prices.