The European Commission (ec) will adopt Euro 6 stage of emission norms, along with the existing Euro 5 norms. It, however, trails behind leading nations in reducing nitrogen oxide (nox) emissions from diesel cars. The Euro 6, according to ec , would significantly lower nox emissions.

ec has considered a nox emission limit for diesel cars at 80 milligram per kilometre (mg/km) for assessing the impact of this measure on air quality and health.With this move, Europe can join leading countries like the us and Japan in setting tighter emission limits for diesel cars, but this measure will be delayed by more than five years as relatively stringent nox norms have already being enforced in the us and Japan will enforce them in 2009. Regarding particulate matter (pm) norms, Europe with Euro 5 norms, will catch up with the us and Japan by 2008 (see graphs Emission norms). 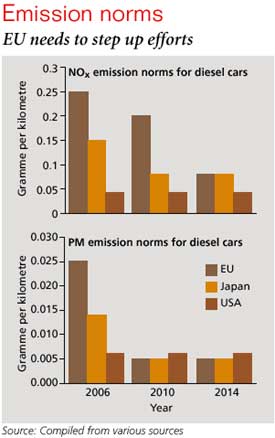 Euro 6 should ideally come into force in 2014-15, five years after Euro 5. But the fact that the decision to implement this along with Euro 5, reflects the magnitude of the problem.

"Reduced emissions from road transport are an important factor to improve air quality in urban areas, particularly because the number of diesel vehicles is increasing in the many parts of eu," says the memo.

The Euro 6 nox limit for diesel cars could further reduce emissions by nearly 60 per cent. Besides, inclusion of the Euro 6 along with the Euro 5 was demanded by many eu ministers and members of parliament.

ec has also released the results of the impact assessment. It says that the improvement in air quality will result in health benefits. Also, there will be an additional 24 per cent reduction in overall nox emissions from light duty vehicles in 2020.