Evacuation of 450,000 people on in coastal Andhra 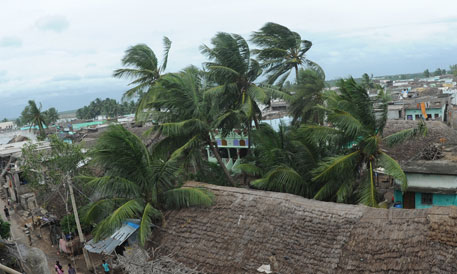 Andhra Pradesh government has started evacuating people from the coastal villages in anticipation of severe cyclone Hudhud. The cyclone is on its course to hit the Visakhapatnam coast Sunday forenoon. According to Katta Hymavati, special commissioner, state disaster management, arrangements for evacuation of 456,000 people from 500 villages have been made. The process is expected to be completed by Saturday evening.

As per the IMD alert, the cyclone will be accompanied by winds of speed of up to 155 kmph and very heavy rains.   The cyclone storm, which was centered about 500 km east-southeast of Visakhapatnam and 550 km south-southeast of Gopalpur on Sunday morning, is moving west-northwestwards and will intensify further into a very severe cyclonic storm  with a wind speed of 130-140 kmph to 155 kmph.