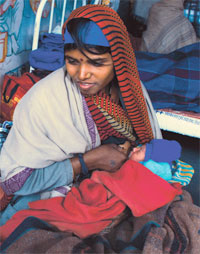 TILL NOW, it was believed that pesticides like widely banned DDT were contaminating breast milk. Now, a group of researchers has found another threat. It has detected high levels of industrial chemicals in breast milk in women from various parts of the country.

These chemicals can be sourced to urban dumping sites. Such sites are heaped with electronic waste that contains flame retarding chemicals. These chemicals seep into the soil and enter the food chain. Studies have shown presence of brominated flame retardants (BFRs) in sediments of the Sundarbans but no study has monitored their levels in humans.

BFRs are fat-loving and easily mix with fat-rich breast milk. Keeping this in mind, researchers at Ehime University in Japan collected breast milk samples of women from Kolkata, Chennai, Chidambaram, Parangipettai, a fishing village in Tamil Nadu, and Goripalayam, an urban slum in Bengaluru. They were in the age-group 25 and 38. Besides BFRs, the scientists found high levels of PCBs (or polychlorinated biphenyls), mixture of compounds used as coolant. PCBs are banned in the US over health concerns.

The highest PCB levels were found in breast milk at the municipal dumping site in Kolkata, followed by urban areas, urban slums, the rural fishing village and suburban areas. Exposure to PCBs and BFR early in life can cause neurobehavioural alterations and disrupt thyroid and reproductive functions.

Lead author Gnanasekaran Devanathan says, “The urban population is relatively richer and consumes higher amount of fat-rich food like dairy products and animal meat which are the major sources of human exposure to BFRs in India.”

The researchers pointed out that the PBDEs, levels in breast milk of general population in India were comparable with those from other countries, like Japan and Russia, but lower than in North America. PCB concentrations in breast milk in India were three to four times lower compared to those in Japan, Canada and the UK, but similar to Cambodia, Indonesia and Vietnam.

The study has been published in the February issue of Environment International.