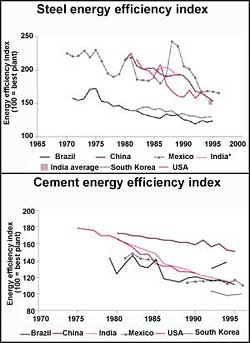 South Korea, Mexico, and Brazil are the most efficient countries in the production of cement, followed by India, which once again appears to have achieved comparable efficiency to the us in previous years (see graphs).

It has not been possible to directly compare energy efficiencies of different countries in the past, because of differences in the economic structure, for instance, the share of industry in the country's total economy.

However, for the first time, International Comparisons and National Commitments by Dian Phylipsen of the Utrecht-based organisation Ecofys compares energy efficiencies in the cement and steel sectors of five developing countries India, China, Brazil, Mexico and South Korea with the us . Phylipsen's study, which factors in economic structures of countries, offers new and valuable insight into the relative energy efficiencies of countries, particularly in the light of the climate negotiations.

It is usually assumed, as in studies by the World Bank and usaid , that the efficiency in developing countries is worse than in developed countries, or that developing countries will install less efficient new capacity compared to what would occur in the case of technology transfer. So industrialised countries, such as the us, have offered to trade in their 'more efficient' technologies' for credits to emit ghg s under two of the mechanisms of the Kyoto Protocol.

Both mechanisms are based on the assumption that industrialised countries, particularly the us, have more efficient technologies to offer in exchange for emission credits. This study demonstrates that a number of key developing countries and intended host countries under the flexibility mechanisms of the climate convention are not necessarily less efficient than intended donor countries.