Exclusive: Chhattisgarh sterilisation deaths not due to rat poison

Reports accessed by Down To Earth show no evidence of death due to poison. Experts say deaths occurred due to unhygienic conditions and medical practices at the camp 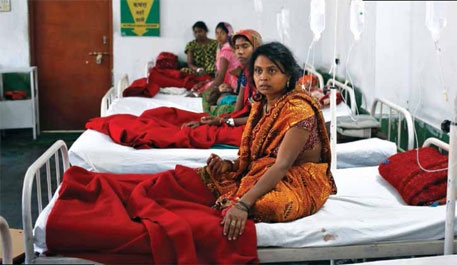 On November 10, news of 13 women dying and many others landing in hospital after mass sterilisations in Chhattisgarh made national and international headlines. Subsequent investigations, including by Down To Earth (“Operation Cover-Up”, 16-31 December, 2014), exposed state attempts to cover up the entire incident as well as deep flaws in India’s approach to family planning. Five months on, no justice seems to have been done. In fact, evidence points to the state government being responsible for the deaths.

Soon after the incident, drug samples from the spot were sent to four laboratoriesgovernment and private-to determine cause of deaths and illness. The list includes the Central Drugs Laboratory (CDL), Kolkata, the National Institute of Immunology, Delhi, Sriram Institute of Industrial Research (siir), Delhi, and Qualichem Laboratories, Nagpur. All four laboratories’ reports, which are with Down To Earth, state that the medicines used in the operations were substandard. “A tablet is defined as substandard when it contains less than 80 per cent of what is claimed,” explains an official with the Central Drugs Standard Control Organisation (cdsco), Delhi. Two reports indicate toxicity.

SIIR tested 50 tablets of Ciprocin 500. The results showed that each tablet contained only 295 mg, or 59 per cent, of ciprofloxacin. It also indicated toxicity. Four of the five mice who were administered with the tablets died within 24 hours. The laboratory conducted an additional test which showed the presence of “zinc/aluminum and phosphide” or rat poison. Its report, however, does not mention the amount, crucial to determine whether the deaths happened due to rat poison. siir’s test on Ibuprofane also shows that the tablets were substandard, with 219 mg of ibuprofane, and contaminated with rat poison.

The CDL report also shows that Ciprocin 500 contained only 258.88 mg, or 51.78 per cent,of ciprofloxacin claimed. CDL’s report, however, does not mention contamination with rat poison. “The Kolkata laboratory is not even equipped to test for contamination of zinc phosphide, or rat poison,” says the cdsco official. Why did the state administration send samples to a laboratory that cannot test for the probable cause of deaths espoused by the state itself?

Lack of seriousness
The CDL report points to the lousiness of the Bilaspur Food and Drug Administration, which had handed over samples to the laboratory. While CDL received 200 tablets (10x20 strips), the official communication put the count as 1,000 (1000x1x500mg). CDL report also claims that the expiry date of September 2016 mentioned on the strip did not match with the expiry date of September 2015 mentioned in the official communication. “Even though these details do not affect the test results, it shows that the authorities were not serious about the issue,” says Sulakshana Nandi of People’s Health Movement, who has been fighting for the rights of the victims.

State harassment
The only serious step taken by the state government so far is to set up a one-person Bilaspur District Sterilisation Camp Judicial Inquiry Commission headed by retired judge Anita Jha. But deposing before the commission has been an ordeal for victims and their families. They had to travel long distances at their own expense. Ramanuj Sahu, for instance, had to travel 50 km twice to submit affidavit on behalf of his wife. The commission did issue letters urging women to file affidavits, but that was on March 3, 2015, the last date of the submission. Of 134 cases, only 51 have submitted affidavits. Most of the victims could submit affidavits only after receiving guidance from the Centre for Social Justice, a non-profit in Bilaspur. Gayatri Suman Narang, who heads the non-profit, says, “The government did not put any effort in collecting affidavits. The room was found closed on several occasions.” To add to their troubles, the commission since March 27 has started to cross examine those who deposed.

Apart from the judicial commission, the police is investigating the matter based on firs of the deaths. “The state government has also initiated a departmental inquiry into the matter, but it is biased as all the members are from the health department,” says Yogesh Jain, convenor of non-profit Jan Swasthya Sahyog. “This is the reason, we have been demanding a clinical inquiry since January.” A clinical inquiry is done by a team, that includes a forensic expert, epidemiologist, gynaecologist, toxicologist, microbiologist, public health expert and local activists, and is considered unbiased. “But the state government is yet to set up one,” he adds.

The courts have also intervened in the matter. The Chhattisgarh High Court took suo motu cognizance of the matter and has asked the state government to submit a response. A public interest petition filed by Human Rights Law Network, Delhi, is pending in the Supreme Court. The apex court, on March 21, blamed the government for being unprepared in the matter. The next date of hearing is April 17, 2015.