Nitrogen dioxide is proving a dificult vehicular emission to control 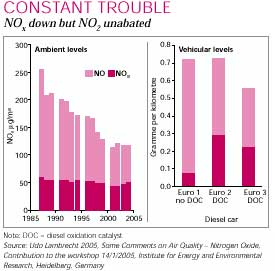 The results, published by the Institute for Energy and Environmental Research (ifeu), Heidelberg, Germany, put a question mark on the emission control technologies being used for diesel vehicles. In Germany, no2 levels exceed the safe limit in many locations. It is known that even a short-term exposure to no2 for up to three hours may cause cough and worsen respiratory illness. Long-term exposures cause increased susceptibility to respiratory infection and lung damage. Moreover, scientists at the University of California, usa, found high no2 levels apparently raise the risk of sudden infant death syndrome (Archives of Disease in Childhood, Vol 90, No 7, July 2005).