Expert panel to study impact of climate change in India 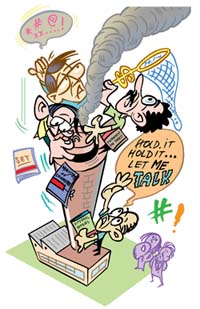 on may 14, the government announced that an expert committee has been set up to study the impacts of climate change in India and identify measures to address the "vulnerability to anthropogenic climate change impact".

The committee comes at a time when India is under pressure from international ngos and countries such as Australia and the us to cut down emissions. India has in the past resisted such demands. But today Union ministries do not speak in one voice on emission caps.

There is also an ambiguity over the exact roles of individual ministries in the nine-member committee chaired by R Chidambaram, principal scientific adviser to the government of India. It comprises experts from government and non-government organisations.

There are also 12 ex-officio members including secretaries of the Union ministry of environment and forests and earth sciences, and secretary to the department of science and technology.
The committee comes when global negotiations on climate change are at a peak, especially after the un's Inter-governmental Panel on Climate Change (ipcc) working group iii report predicted that climate change would cause dire consequences in poor countries.

The setting up of the expert committee also coincides with global negotiations to find measures to fight emissions post-2012 when the Kyoto Protocol expires.

Under the Kyoto Protocol, industrialised countries are expected to reduce ghg emissions to 5 to 6 per cent below 1990 levels by 2012. There is, however, immense pressure on developing countries to agree to mandatory emission caps.

But according to the government, the decision to form the expert committee follows a promise made by Union finance minister P Chidambaram in his budget speech this year. The centre was planning to set up a task force on climate change, the minister had said.

"The formation of the committee shows India's concern towards climate change," says Pradipto Ghosh, secretary, ministry of environment and forests (moef).
But disagreement has surfaced within the government whether India should accept emission caps. This was reflected in the first-ever debate on climate change in the Lok Sabha on May 9 (see box Many many takes). moef, which is responsible for initiating climate-related policies in the country, does not favour bowing down to international pressure on emission caps.

The ministry has emphasised that there will be no shift in India's international commitments on climate change for now, though it plans to initiate measures to prevent impacts of global warming.

The union ministry of external affairs (mea) echoes the forest ministry's stand. "It is too premature for India to agree to emission caps. Developed countries are nowhere near the target set under Kyoto. They are still seeking us to reduce emissions," says T Armstrong Changsan, deputy secretary, mea.

The ministry, however, emphasises that there should be a debate on emission caps. Government should be cautious, it says. "If developed countries have demonstrated any progress in reducing emissions, then we would be under some obligation to agree to mandatory caps," adds Changsan.

"Developing countries are being particularly targeted and pressured because it is feared that India and China will be the two largest economies of the future," says U R Rao, former chairman of the Indian Space Research Organisation. R K Pachauri, head of ipcc, says that time has not come for India to agree to emission caps. Nevertheless it should set up a road map to deal with climate change.

An official from moc, on conditions of anonymity, also says that India is facing huge pressure from the eu and the us to accept the emission cap.

According to sources in the ministry, the government cannot ignore the fact that European companies are putting pressure on their governments to include climate policies into wto negotiations so that their products remain competitive in the international markets.

Similarly, the ministry hopes India's commitments on climate change can brighten its global trade prospects. "There is no way that India can escape the growing demand for emission cuts now," says K Subrahmanyam, head of the government task force on global strategic developments.


The character and mode of function of the new committee and the roles of the various union ministries comprising it has already sparked off a debate. Among the contentious issues is that of investigating erratic weather that the country has been witnessing of late.

Its recent experiences with erratic monsoons have been ascribed to global warming in many quarters. But there have been very few studies to substantiate matters.

According to the government, the new entity will be able to introduce long-lasting measures to combat climate change. "India is gearing up to cope with the possible impacts of climate change. At this point, the expert committee can come up with specific policy recommendations on agriculture, industry and livelihood issues so that the effects of climate change on communities can be mitigated," says Ghosh.

"The committee should ensure there should be sustained research on emission inventory and projection of the policy measures for improving agriculture, health and water," says A P Mitra of the National Physical laboratory in Delhi.

N H Ravindranath of the Indian Institute of Sciences, Bangalore, and a member of the new expert committee, however wants the body to do more. "It should not be purely a scientific panel. It should be supported by policy-makers. This will ensure that the measures are executed properly. Ministries involved in energy use and production should have a role in the task force and its plan of action," he says.


But all this is not going to be easy. The ministries have not yet been briefed of their roles in the committee. "The Union ministry of earth sciences will play an important role wherever climate change is involved. The Union ministry of science and technology (most )will also have a role to play," says Kapil Sibal, minister, most.

Sources in the mea say that the ministry is not clear on its contribution to the expert committee. But it plays a significant role in the international climate negotiations and is confident of doing so in the future.

Scores of scientists are already working on identifying ways to check climate change impacts. Co-ordination between these researchers and the expert committee is a must to tackle climate change.It remains to be seen if the constitution of the new committee will contribute to anything substantial to the climate debate.