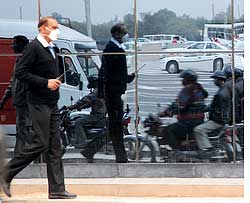 how often have you felt irritated, even tense, while trying to make your way through car-clogged roads? New research shows that sniffing diesel fumes could well be the reason for your discomfiture. Short exposure to diesel exhaust can induce stress response, a study conducted by Paul Borm and his colleagues from the Centre of Expertise in Life Sciences in the Zuyd University in The Netherlands has revealed. The study establishes, for the first time, the effects of diesel pollution on the brain. It was published in the March 11, 2008 issue of the Particle and Fibre Toxicology Journal.

The Dutch researchers conducted the study on 10 volunteers. Some were exposed to diesel exhaust (300 microgrammes per cubic metre) and others to filtered air. They stayed in the room for an hour while their brains were scanned using electroencephalograph, a process of recording brain wave activity. The scanning continued after they left the exposure room. Various parts of the brain were scanned and there was an increase in brain activity in the cortex after 30 minutes of exposure to the diesel fumes.

What explains this increase? Sundeep Salvi, director, Chest Research Foundation, Pune, says, "There is a theoretical possibility that nanoparticles emitted in large numbers from diesel exhaust can enter the brain from the nose and induce changes in the brain cells either directly or indirectly by generating a lot of free radicals." The Dutch researchers also suggest that nanoparticles are to blame. But they also say that further studies are necessary to establish the relationship between the amount of exposure to particles and brain's response and clinical implications of the findings. Salvi also adds, "This is perhaps one of the first studies of this kind on humans, and interpretation of their observations should be made very carefully."