F for forest and furniture 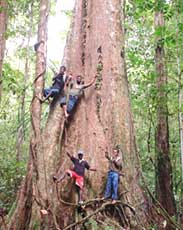 Threatened hardwood from Southeast Asia is landing up as flooring in the us with illegal trade going unchecked, says a report of the Washington-based Environmental Investigation Agency (eia).

us home-improvement stores are selling flooring made of merbau, a deep, luxurious redwood found mostly in Indonesia and Southeast Asia, according to eia. Last year, eia had reported that 300,000 cubic metres of merbau logs were being smuggled out of Papua every month. The trade is worth us $600 million in the retail flooring market.

In 2001, Indonesia prohibited all log exports to protect its forests, which have one of the world's highest deforestation rates. But despite the government's orders, acres of these forests are logged illegally to supply factories across Asia.

Major wood-flooring companies have disputed the agency's report. At present, the us has no law prohibiting products produced from illegally cut timber, though there is the Lacey Act, which bans the import or sale of wildlife and wildlife products killed or captured in violation of us or foreign laws.