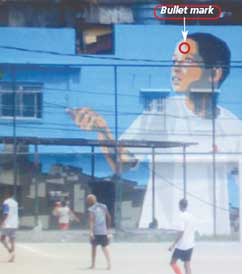 The favelas, or shanty to - wns of Brazil, are a uniform red ochre of unplaster - ed brick walls. But two artists from the Netherlands want to paint them every colour under the sun to showcase their colourful soul.

In Feb ruary, Jeroen Koolhaas and Dre Urhahn started with Vila Cruzeiro, a favela in the nor th of Rio de Janeiro where violence is a daily reality.

A mural painted by the community at the artists’ prompting depicts a boy flying a kite, but there is a hole in his head, one not made by brush strokes but by a bullet from one of the frequent shootouts between the police and drug trafficking gangs.

“This boy is a metaphor for kids who live here,” Urhahn, the Amsterdam-based film editor, said. “Living here has changed my perceptions about the people, and about myself.” Eight-year old Susane Souza, who participated in making the mural, said, “People from all over come to see our favela.”