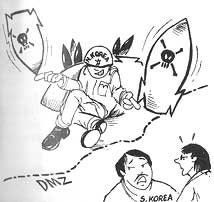 NORTH Korea is in the news again. Soon after it agreed to accept international inspections of its nuclear facilities, the South Korean government released a report that said North Korea operates eight chemical weapons plants and three biological warfare laboratories. However, the report gave no details of the chemical weapons or where they were located.

South Korea stated that its neighbour had stored 1,000 tonnes of bio-chemical weapons and completed underground aircraft hangars in 20 bases along the demilitarised zone (DMZ). The North had deployed 340 jet fighters near the front line and built two airfields near the DMZ, from where warplanes could strike the South Korean capital Seoul in eight minutes.