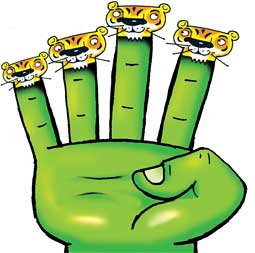 Tiger faeces give an estimate of its population

researchers from Bengaluru extracted dna from tigers' faeces to estimate their population. Not only did it turn out to be as accurate as the camera trap method, it also provided information on the animal's genetic diversity.

Faeces were collected in Bandipur National Park in Karnataka and analyzed for dna. The population estimate was 62 tigers. This was compared with earlier estimates made using camera traps. The two were identical, indicating that the faecal dna method was as accurate as camera traps.

For the faecal method, one needs to identify markers on the dna strand. These markers are unique to each tiger. Since tigers have a low genetic diversity five markers in the dna strand of one tiger were enough for Bandipur, said the team. "The chances of making a mistake with five markers are once in 200 times, which is okay given the tiger population is definitely less than 100," said Uma Ramakrishnan, one of the authors.

In case of the camera trap methodology, there are possibilities of camera thefts and difficulty in capturing inaccessible terrains. Moreover, it is used for animals which can be counted using distinguishing marks; stripe patterns are unique to each tiger. This is where genetic sampling gets an edge over camera traps, said the study published in the June 17 issue of Biological Conservation. It can be used for species which don't have distinguishing marks between individuals. This method is also cheaper than using camera traps--Rs 11,095 per animal identified through camera versus Rs 7,413 for dna analyses.

Before camera traps, the standard method followed by wildlife researchers was counting pugmarks. The 2008 census using this method found 80 tigers in Bandipur.