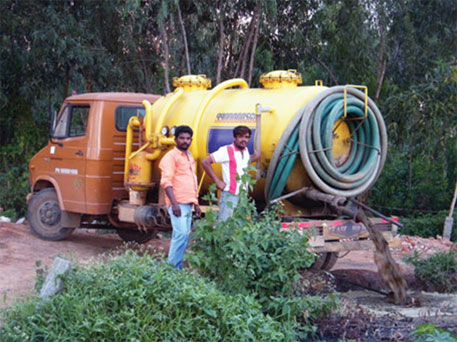 With over half the world’s population now living in urban areas, the waste people produce has become a pressing problem, especially in developing countries.
Hanoi city in Viet Nam is currently hosting the third Faecal Sludge Management Conference (FSM3), which brings together world-class research and science and donors, cities, utilities, investors and other stakeholders, with the aim of fostering an effective dialogue to solve the problems of handling human waste.

The objective of FSM3 is to present practical innovative solutions that can be applied to scale in the world’s rapidly growing cities. How to develop tools to assess the generation of faecal sludge, the pathways it takes from containment to disposal, and the constraints to establishing an effective chain of services to manage it, are some of the topics that are being discussed at the event this week. In addition, FSM3 will discuss new waste handling and treatment technologies and sustainable business models.

At the water summit held in Budapest on October 8, 2013, UN Secretary-General Ban Ki-Moon had called for action on the urgent issue of sanitation to underpin human dignity and health. “It is plain that investment in sanitation is a down-payment on a sustainable future.  Economists estimate that every dollar spent can bring a five-fold return,” he said.

Adequate sanitation is especially urgent in the urban environment. Progressively, more people are living in urban areas. At present, 52 per cent of the world population (3.8 billion people) lives in urban areas. Most developing countries are experiencing runaway urban growth, with more than one person in three living in slums, and the urban sanitation challenge is growing daily. Figures in the WHO/UNICEF Joint Monitoring Programme  show that the number of urban residents without access to improved sanitation has risen by 700 million between 1990 and 2010. The negative impact of poor sanitation is much stronger in urban areas; an analysis of Demographic and Health Surveys (DHS)  data from 130 countries shows that childhood stunting associated with open defecation is three times greater in urban than in rural areas.

The most commonly accepted solution for urban sanitation is piped sewerage with centralised wastewater treatment. Most engineers, politicians and city managers regard it as the only legitimate solution. However, many urban dwellers in developing countries (more than 90 per cent in Sub-Saharan Africa) have no access to a sewerage system, or the running water needed to make it work.  What’s more, they won’t be able to afford these services any time soon. Sewerage is provided almost exclusively to the wealthier people while poor people have mostly been left to make their own arrangements. They improvise on-site sanitation systems such as septic tanks or pit latrines, which may be illegal under local by-laws. Those who cannot afford this defecate in the open or into a plastic bag (called flying toilet).

Latrine pits and septic tanks need to be emptied periodically as the densely built urban environment won’t allow new pits to be dug every time they fill up.  Residents may resolve this by allowing their toilets to overflow, or resort to manual pit emptying. And once collected, the sludge is often dumped illegally into urban watercourses, open drains and rivers.

What does this mean for the future?  The costs and operational challenges of expanding, operating and maintaining conventional sewerage systems for all the developing world’s cities would by far outstrip the technical, financial and water resources available. We need to develop better sanitation solutions, especially for the poor communities who most need them, to safeguard the entire urban environment where most of us now live.

The challenge of sanitation in Indian cities is acute. With very poor sewerage networks, a large number of the urban poor still depend on public toilets. Many public toilets have no water supply while the outlets of many others with water supply are not connected to the city’s sewerage system. The sanitation landscape in India is still littered with 13 million unsanitary bucket latrines, which require scavengers to conduct house-to-house excreta collection.

Faecal sludge or septage is generated either from open defecation or on-site sanitation systems. Energy Alternatives India (EAI), a consultancy group, estimates that about 0.12 million tonnes of faecal sludge is generated in India per day.

In most of the cities, only crude and unhygienic septage handling practices exist and there is no proper municipality infrastructure that performs the task of septage management. In contrast, with the large proportion of on-site installations, limited attention has been accorded to proper construction, maintenance management and safe disposal of septage from septic tanks and pit latrines.

According to a WHO-UNICEF report, around 638 million people do not have access to toilets in India, which leads to 58 per cent people resorting to open defecation. Indians leave about 100,000 tonnes of faecal matter in the open every day, in the fields, on the river banks and in open spaces in big cities.

The faecal sludge in open fields and in proximity to water bodies usually is not collected and they get naturally assimilated in the surrounding environment. Where the faecal sludge is left open lands near residences and roads, it is sometimes collected as part of the MSW collection and handling programme.