Fall of a premier institute

WHEN the National Institute of Pharmaceutical Education and Research was set up in 1998, people had high hopes. Established in Mohali, Punjab, as an IIT-equivalent premier institute, NIPER was to set the standard in pharma research in the country, while producing experts and offering technical consultations to small-scale industries. For a country whose pharma industry relies on affordable bulk drugs and generic medicines, an institute like NIPER is essential to provide new molecules and innovations that the industry could access. This is particularly important for small-scale pharma firms that, unlike pharma giants, do not have in-house research facilities. But of late, NIPER has been mired in controversy, mostly due to funds embezzlement and administrative problems, dissuading students from enrolling themselves at this apex pharma research institute.

The latest controversy is a public interest petition filed by the institute’s associate professor Parikshit Bansal in the High Court of Punjab and Haryana, seeking a CBI inquiry into misappropriation of funds for the department of Intellectual Property Rights (IPR) and action against the former and incumbent directors of the institute.

Bansal, who is with the department of pharmaceutical management, has accused former director P Rama Rao of siphoning funds earmarked for the IPR department. Under the 11th Five Year Plan, the Centre had sanctioned Rs 2.25 crore for setting up the IPR department, meant to offer masters programme in IPR management as well as conduct training programmes for the faculty of NIPER and sister institutes so that they can learn to manage their patents effectively. In 2009, Bansal says, he chanced upon a few internal documents which showed that the Centre had disbursed Rs 1.15 crore since 2007. “I was never told about the funds, even though I was in-charge of the project,” he alleges. That year, he blew the whistle by writing to the President of India, the Central Vigilance Commission (CVC) and the Board of Governors of NIPER, apprising them of the embezzlement. Rama Rao resigned in the midst of the controversy.

The newly appointed officiating director, K K Bhutani, promised Bansal a new beginning. In 2010, the Centre released another parcel for the IPR project: Rs 47 lakh. Bansal alleges that Bhutani sanctioned more than half of the allotted money for buying SciFinder software, a research tool, even though it was not approved under the plan. RTI queries by a few other professors of the institute in 2011 revealed that the central vigilance officer of the Ministry of Chemicals and Fertilisers, under whose ambit the institute falls, had not initiated any inquiry into Bansal’s complaints. Following this, Bansal approached the high court in August this year. The court has issued notice to the institute, the directors and the Department of Pharmaceuticals. The case will be heard on November 16.

Bansal’s experience is not a one-off case. In April this year, NIPER dismissed Nilanjan Roy, associate professor in the department of biotechnology, on charges of embezzlement of funds.

But Roy shares the other side of the story with Down To Earth: “They kicked me out because I exposed misappropriation of funds in purchase of diesel, hiring of support staff and buying spare parts.” He wrote to V M Katoch, chairperson of board of governors of NIPER, asking for a probe into his expulsion, but his appeal was dismissed. Roy has recently moved high court. Similarly, in 2005 the contract of a scientist, Animesh Roy, in the organic chemistry department was not renewed on charges of disobedience and poor performance. NIPER was forced to take him back after an inquiry by the board of governors found the charges invalid.

Bansal, Nilanjan Roy, and another colleague Neeraj Kumar, have now taken it upon themselves to expose the alleged mismanagement. They have created a blog, where they post incidences of corruption and mismanagement, replies to their RTI queries and questions raised in Parliament regarding NIPER. 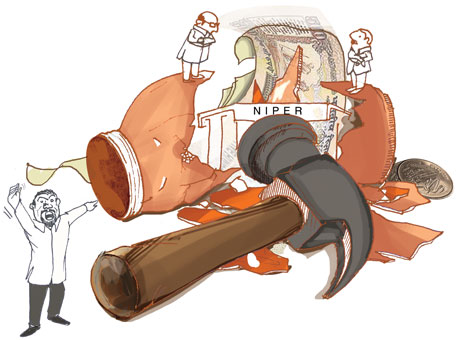 Their expose has created a buzz in Parliament. In 2012, eight questions were raised in the Lok Sabha, most of them pertaining to financial misappropriations. Replying to a question on September 6, Union Minister of State for Chemicals and Fertilizers Srikant Kumar Jena said the Comptroller and Auditor General of India (CAG) did not find any lapses in the institute and that the institute has an internal audit system in place since May 2011.

Replying to another question, Jena said neither the government nor the board of governors of NIPER received any written complaint regarding financial irregularities. Documents with Down To Earth, though, show the contrary.

The three whistle-blowers have already caused a stir among the NIPER administration. K K Bhutani told Down To Earth that the three scientists have disrupted the functioning of the institute. His view is shared by Jagdeep Singh, secretary general of the SME (small medium enterprises) Pharma Industries Consortium (SPIC), which facilitates interaction between small-scale pharma firms and NIPER. “Scientists are unable to work as they spend all their time answering public interest petitions, RTIs and Parliament questions. All of them have been engineered by these three scientists.”

Despite the problems, research and industry experts think the institute has an important role to play. “It has a great faculty, a strong advisory council and the research is cutting edge,” says Girish Sahni, a member of NIPER board of governors and director of the Institute of Microbial Technology in Chandigarh.

Since it was established, NIPER has applied for 190 patents and got 40 of them approved. Seven of them have been successfully commercialised. One sold to Indian firm InSwift is an improved process of making blood thinning drug Clopidogrel. The others include improved microbicides and anti-malarials. Bhutani contends that “business is not our motto”. “We create manpower for the pharmaceutical industry and do cutting-edge research. The Thomson Reuters Awards for Excellence is a testimony to our efforts,” he says. NIPER received the award for excellence in research and analysis. In the past two years, Bhutani says, NIPER has had 1,378 research publications. Between 2008 and 2011, the institute produced 461 post-graduates, 144 MBAs and 48 PhDs.

Not all experts are impressed with this. “The right question to ask here is what kind of patents are these,” says N Raghuram, former secretary of Society for Scientific Values, a watchdog organisation. “These are not new molecules or products, but merely new processes of making old molecules or improved versions of older products,” he says.

Lalit Kumar Jain, who is a member of board of governors, elected by the Ministry of Chemicals and Fertilizers, and SME pharma owner, says the quality of scientists in NIPER is bad. “That is why they have not been able to do original research.”

Singh, however, quashes Jain’s allegations, saying he was expelled from SPIC for unethical practices. The industry stands by NIPER, he adds. T R Gopalakrishnan, adviser with the Indian Drug Manufacturers’ Association, is also content with NIPER’s performance. “Drug manufacturing is an excruciatingly lengthy procedure. A lot of clinical studies need to be performed. Twelve years is indeed a very short time and seven commercialisations are not bad,” Gopalakrishnan says.

Sahni believes the prevailing problems can be tackled by hiring a regular director. Singh suggests that the institute should hire more staff to answer RTI and Parliament questions. “Why should the director and scientists waste their time?” he asks.

According to Raghuram, root of the problem lies with the Ministry of Chemicals and Fertilizers, which, unlike the health and science and technology ministries, has no experience in handling research institutes. He, however, reckons that transferring the institute to another ministry may not be the solution. “All scientific institutes in the country function in a feudal manner. The director rules the roost, and the scientists don’t have much of a say.” Raghuram adds that the internal decision making process should be more democratic, and that a decision making body should be carefully selected, with a balanced mix of internal and external experts. “The ministry should ask the scientists to vote for the council.”

As the administrative problems and financial irregularities continue, students are the ultimate losers. Raghuram says NIPER is no longer top choice for students. In September students at the newly set up NIPER-Ahmedabad held protests against inadequate lab facilities and below-par teaching standard.

In recent years six new NIPERs have been set up across the country—Ahmedabad, Hyderabad, Hajipur, Kolkata, Rae Bareli and Guwahati. The institute receives generous funds from the government—it was granted Rs 156 crore under the 11th Plan alone. The ministry has pitched a vision paper for Rs 1,400 crore for NIPER in the 12th Plan. But experts suggest it would be good to tackle the administrative problems first.