Serious lapses and errors in over 20 per cent cases test-checked; many deserving farmers left out 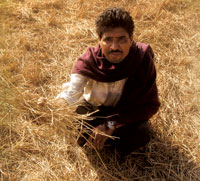 When the UPA government announced its agricultural loan waiver scheme in 2008 to give relief to small and marginal farmers by writing off their loans, it was criticised as a gimmick to capture votes in an election year. Now the Comptroller Auditor General (CAG) of India has criticised the way in which the scheme was implemented.

The chief auditor of the country has found gross irregularities in the implementation of Rs 50,000-crore Agricultural Debt Waiver and Debt Relief Scheme (ADWDRS). In the CAG report that was tabled in Parliament Tuesday, the government auditor said that while carrying out the performance audit of 90,576 cases under the scheme, it found that 20,216  cases have either lapsed or had errors.

The CAG report cites several cases where deserving farmers were left out while ineligible farmers were given benefits. Under the scheme, 36.9 million small and marginal farmers, along with 6 million other farmers were given debt relief to the tune of Rs 52,516 crore. The report was tabled by the ministry of finance through its minister of state.

“Overall, the Performance Audit revealed that in... (22.32 per cent of cases test-checked) there were lapses/errors which raised serious concern about the implementation of the scheme.” Besides, the report reveals that there are several cases where farmers who had taken loan for non-agricultural purposes or whose loans did not meet eligibility conditions, were given benefits under the scheme.

Out of the 9,334 accounts examined by CAG across nine states, as many as 1,257 accounts were not eligible for benefits which were around 13.46 per cent. It further adds that of the 80,299 accounts granted debt waiver, about 8.5 per cent were not eligible as a result of which Rs 20.5 crore was disbursed among ineligible persons.

The CAG also found instances of tampering of records and lapses on the part of the department of financial services (DFS) in the ministry of finance for its failure to monitor the scheme properly. The report says that it found 2,824 cases of tampering with a claim amount of Rs 8.64 crore. It suggested that DFS should review these cases and stringent action should be taken against erring officials and banks.

Money went to MFIs, too

The auditor general also found gross irregularities in 42 lending institutions that are charged with not preparing a proper list of beneficiaries. It clearly says that several farmers who were eligible for the benefit under the scheme were not considered for loan waiver by the lending institutions. Another observation was that micro-finance institutions (MFIs) benefited under the loan waiver scheme which was clear violation of guidelines issued for the debt waiver scheme.

Interestingly, the banks too seem to have been indicted as they claimed undue benefits like penal interest, legal charges and miscellaneous charges from the government while under the scheme banks were supposed to bear these charges themselves.

Apart from this, the report says that no acknowledgement was taken from over 34 per cent of the farmers who had benefitted from the scheme. This was important so that farmers don’t take fresh loans from banks. The CAG has now instructed the government to issue directions to banks to launch a drive to obtain the acknowledgements, the report stated.

The scheme was announced by then finance minister P Chidambaram in Budget 2008-09. According to it, farmers holding up to 5 acres (one acre equals 0.4 hectares) of agricultural land and had taken loans up to Rs 50,000 can avail loan waiver.