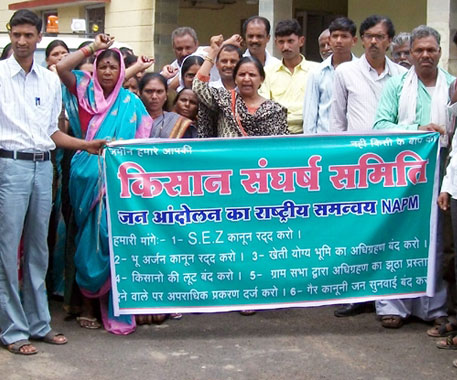 Around 150 farmers from eight villages in the Saunsar tehsil of Chhindwara district in Madhya Pradesh gathered at the guest house of the public works department (PWD) on Thursday and staged a protest. They were aggrieved by the individual hearing process adopted for land acquisition for a proposed special economic zone (SEZ) in the area. June 13 marked the first of the many individual hearings scheduled with the district collector to hear objections of farmers to the SEZ, which the farmers boycotted.

The process of acquisition of land for a multi-purpose SEZ developed by Nagpur-based Chhindwara Plus Developers Limited has been going on in the Saunsar tehsil of Chhindwara district since 2007, say farmers. Ramesh Kumre, land acquisition officer and sub-divisional magistrate, Pandurna,  says around 1,800 hectare (ha) of land has already been acquired in the area by following procedures under Section 4 of the Land Acquisition Act, 1894.

Around 269 farmers and other land owners in the eight villages have refused to part with 430 ha of land which is still required for the SEZ, says farmer Bhaskar Tekade of Satnoor village. In April this year, a land acquisition notice was issued to the panchayats, following which representatives from the various villages went to district collector Mahesh Chowdhari to submit their objections. Chowdhari refused to accept it, says Shyamla Sanyal, owner of a small gun-powder factory in Satnoor. “On April 30, which was the last day for submitting objections, we had to take a bus-load of people from the villages and staged a demonstration before the objection was finally accepted,” she says.

Notices were issued to the villages, asking farmers to register their objections at individual hearings scheduled on different dates between June 19 and June 22. As late as the night of June 11, farmers from three villages were issued fresh notices, asking them to attend hearings on June 13 and 14. This last move, says Sanyal, “is totally unacceptable. When we asked the land acquisition officer the reason behind the change in dates, he said that he had other appointments on the previous dates. This is no way to hold hearings on such crucial issues.”

At the protest, farmers protested against individual hearings, accusing the administration of trying to divide the community. “It is illegal to call people for hearings on different days,” says advocate Aradhana Bhargava of the people’s organisation Kisan Sangharsh Samiti who is providing legal support to the agitation, “The administration should have held a public hearing under the proper sections of the law.” She also says that land acquisition by government agencies is legal only in case of lands acquired for a public purpose. “Why is government aiding a private project proponent?” she asks. The notices also said that if farmers failed to turn up on the given date, the administration would take a suo-moto decision, which again is totally illegal, she says.

Farmers at the meeting submitted a memorandum to the land acquisition officer stating that they do not wish to part with their land and that the administration should not issue further land acquisition notices to the people. It was signed by 150 farmers and other land-owners, says Sanyal.

Land acquisition officer Ramesh Kumre confirmed that the hearing had been cancelled because farmers turned up in a group instead of individually.

Farmers complain that no legal procedures were observed in the land acquisition process. “The land acquired earlier has been obtained through dubious means,” Tekade told Down To Earth. “Mostly poor and marginal farmers were targeted through touts, and were relieved of their land for as little as Rs 40,000 to Rs 3 lakh per ha. More than 50 per cent of the farmers whose lands were taken want their land to be restored to them.”

Dubious means were used to get the consent of panchayats, says Satnoor sarpanch Reemaji Dethe. “In February this year, the gram panchayat secretary got my signature on what he said was a routine document. Since I had joined just a month earlier, I did not know the procedures and signed where he asked me to sign. Later I found out that it was a document saying that the gram panchayat consented to the land acquisition,” says Dethe.

“Farmers and small industry owners have been issued threats by the project proponents. Goons are being used to quell protests,” says Sanyal.