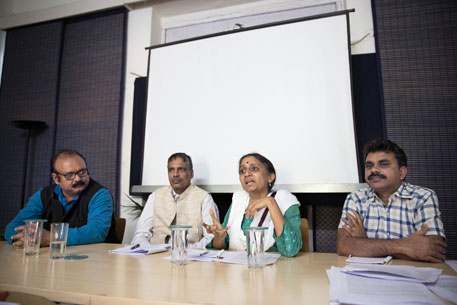 A number of farmers’ organisations got together on Thursday to demand a minimum living income equivalent to that of agricultural scientists for all farm households in the country and asked political parties to make it a part of their poll manifesto. Citing NSSO findings, they said the average monthly income of farm households in the country is Rs 2,115, which is lower than the monthly expense of Rs 2,700 and is pushing such households into a vicious cycle of impoverishment. Their income is much lower than what even a peon in a government job earns, said activists and leaders working with farmers, at a press conference held in Delhi.

Blaming the government policy of “produce more and prosper”, they said the government endlessly promoted high-external-input-based intensive agriculture that has turned out to be “produce more and perish” for farmers. This approach has spoilt Indian soil, leaving at least 25 per cent of land degraded, and water and farms poisoned with synthetic chemicals. To add to their woes, the minimum support prices (MSP) offered by the government for agricultural produce are not based on present input prices but based on an old formula that doesn’t cover all costs incurred by farmers. This translates into loss for them. The present market systems and land acquisition is further compounding their problems. All these factors have made agriculture unsustainable, forcing farmers to commit suicide—there is one suicide every half an hour—and 2,300 farmers quitting agriculture every day.

Addressing the press conference, Kavitha Kurunganti of advocacy group Alliance for Sustainable and Holistic Agriculture (ASHA), demanded that the government set up a farm income commission to ensure minimum living income to all farm households through annual assessments and focused recommendations. She also demanded a basket of measures such as remunerative prices for all crops along with timely procurement, and social security for all farm households—especially small farmers, tenant farmers and agricultural workers—to deliver minimum dignified livelihood for all farm households. There should be a recasting of current price support system with correct valuation of costs incurred by farmers, reasonable margins over such costs and inclusion of living costs, with procurement made effective and expansive, Kuruganti said.

Adequate insurance and compensation mechanisms to provide for risk-buffering and disaster relief should be another focus area to retain farmers in agriculture, added Saroj Mohanty of Paschim Odisha Krushak Sanghatan Samanvay Samithi. He said various natural resources like land, forests and seed, which are prerequisites for food and livelihood security, are being viewed as business commodities on which corporations can make huge profits. Various governments are actually abetting grabbing of resources from agriculture through policy and regulatory frameworks that are anti-farmer. Large tracts of land are being acquired in the name of development that has nothing in it for the local communities. “We demand that this is stopped – there should be no forcible acquisition and no acquisition of agricultural land for non-agricultural purpose. We also demand that forest management approaches have biodiversity and livelihood security as prime objectives and that ownership should rest with local communities,” said Mohanty.

Rohtas Rathee, national secretary of Bhartiya Kisan Union (BKU), said ministries and state governments base their agricultural growth on seed replacement rate, production and yields. The need is to measure growth from farmers’ point of view by taking into account their income and development as they comprise over 60 per cent of the population.

Stressing the importance of seed sovereignty, Pankaj Bhushan of Coalition for a GM-Free India cautioned against exclusive monopolies already building up in various crops. This is getting accentuated with GM seeds everywhere in the world. For instance, within the entire GM crop land around the world, 95 per cent of the seed comes from just one organization—Monsanto. He pointed out that when even industry-sponsored reports are pointing to more countries opting out of GM crop cultivation, it is utterly shocking that our environment minister gave a go-ahead to field trials of hundreds of GM crop field trials. “The minister is unable to give any rational and scientific reason as to why he overturned his predecessor’s decision and what new basis does he have, that she did not, for allowing these trials, that too on the eve of the elections, and before a crucial Supreme Court hearing?” Bhushan asked. He demanded that the approvals be withdrawn immediately by the government and urged the state governments to be alert, heed scientific and democratic voices and deny permission for trials in their states.