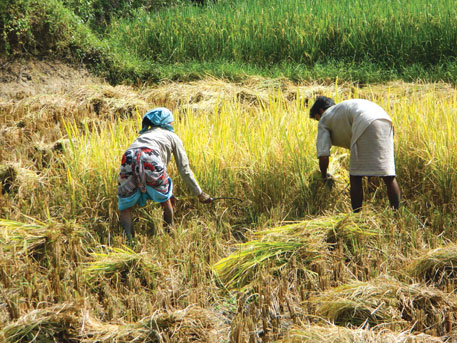 Farmers in many parts of the new state of Telangana are up in arms against the Telangana Rashtra Samiti government's proposal to put a time cap to farm loan waiver.

Farm loan waiver of up to Rs 1 lakh to all farmers was one of the main poll promises made by chief minister K Chandrasekhar Rao in the recent elections. The promise was incorporated in the TRS manifesto and was repeatedly announced in all the public meetings during the election campaign. It was this promise that actually helped TRS to emerge victorious.

However, on June 4, in a meeting with State -level Bankers Committee on farm loan waiver, the chief minister made it clear that his government would be able to waive only those crop loans up to Rs 1 lakh that were disbursed during the 2013-14 agriculture season. The government made it clear to the bankers that the loan waiver scheme would not be extended to any other type of loans, including gold loans, even if taken for the purpose of agriculture during 2013-14 or before that.

As per the government data, the net crop loan disbursals in the Rs 1-lakh bracket during 2013-14 stands at Rs 14,897 crore. The figure was further brought down to Rs 7,840 crore by eliminating gold loans (Rs 2,700 crore), post harvest loans (Rs 500 crore) and loans given to sugarcane and tobacco growers (Rs 500 crore).

The chief minister had asked the bankers to get back with final figures by June 9 to finalise the action plan. Finance minister Etela Rajender, too, had announced the government's plan to waive only 2013-14 loans up to Rs 1 lakh.

Protests broke out at several places in Adilabad, Nizamabad and Medak districts yesterday as farmers, including supporters of  TRS, took to the streets. Joint Action Committee (JAC) of farmers staged dharna and burnt an effigy Rao. Unconfirmed reports said a farmer reportedly died of cardiac arrest after hearing the news that loan waiver was limited only to 2013-14.

KCR gets flak
All the opposition parties in Telangana have  opposed the proposal to impose a time cap on loan waiver. Congress Legislature Party (CLP) leader K Jana Reddy has asked the government to review its decision.

"KCR and TRS are going back on the election promise of unconditional loan waiver. The present decision is a betrayal of farmers who are distressed by debts," he said. The Telugu Desam Party (TDP) has threatened to launch an agitation.

In the wake of strong protests by farmers, finance minister Etela Rajender has clarified that the government had not taken any decision on farm loan waiver. He said that the government has only asked the banks to provide all data on outstanding loans. He has appealed to the farmers not to move ahead with their agitations "believing what others say." The bankers are expected to provide all data on June 9.

He has reiterated the TRS government's commitment to write off all crop loans up to Rs 1 lakh as promised in the manifesto. He said the government would issue an order on loan waiver only after a few days going through all relevant data.