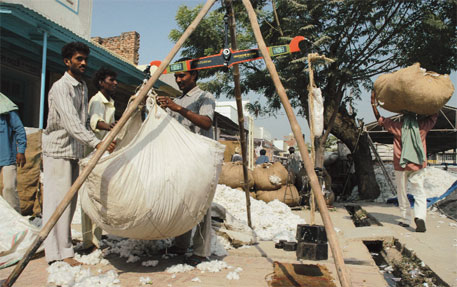 THE area under cotton cultivation in the country is likely to shrink this year despite bumper production in 2011-12. Reason: delayed monsoons, high cost of cultivation, low market prices and inconsistent export policy. Farmers are shifting to other crops like guar, groundnut, soya and pulses.

The shift is happening in major cotton producing states, including Gujarat, Haryana, Maharashtra and Punjab. Although the agriculture department of various states say it is too early to predict the exact state-wise decrease in area under cotton, they do confirm it would vary between five and 12 per cent.

In Maharashtra, the area under cotton is expected to reduce by 100,000 ha from 4.12 million ha last year, and replaced by soya and pulses crops. The prediction is being made on the basis of demand of cotton seed in the market. The state agriculture commissioner Uma Kant Dangat, however, says it is too soon to say anything. “It all depends on monsoon. If it arrives in the first week of June, the area under cotton will increase, but if it crosses June 15, it would reduce,” he says. Pre-monsoon cotton sowing has already started in some areas of Maharashtra, he adds. Vijay Jawandhia, farmers’ leader from Vidarbha region, says, “With the falling prices of cotton, it is better to switch to other crops. But the shift needs to be in large numbers for our prosperity.” The cost of cultivating cotton has also increased due to rise in the use of fertilisers and pesticides, he adds. “Even their prices have increased.”

An official from the Haryana agriculture department, on the condition of anonymity, says the state has witnessed about 20 per cent decline in the area under cotton. “Last year in May cotton was sown in 450,000 million ha. This year it is around 350,000 million ha,” he says, adding that farmers are trying to experiment with guar and pulses. Guar, a bean mainly grown in Rajasthan, has found a good market because of its use as a lubricant in gas drilling. It sells at Rs 20,000 per quintal.

The south-west districts of Punjab, Sangrur, Barnala, Mansa, Bathinda, Faridkot, Muktsar, Fazilka and Ferozepur mainly grow cotton during kharif. “But this year we have decided to introduce guar. It is expected to occupy about 15,000 ha during its first trial year in the state,” says the state agriculture director Mangal Singh Sandhu. Guar is a good cash crop and its prices have increased in the past two years, he says. “As far as the area under cotton is concerned, it is likely to reduce by about five per cent, but we are hopeful it will be on a par with last year’s 507,000 ha.”

No report of decrease in acreage in Andhra Pradesh, the largest cotton producing state, has been reported yet. The state, which saw 4.7 million ha under cotton last year, goes for late sowing of the crop. An official from the agriculture department says farmers in the state start sowing in June-July after the arrival of monsoons. “It is too early to predict the trend because farmers still want cotton. Recently, a stampede like situation arose in Ranga Reddy district where cotton seed was being sold,” he said.