Fast-developing nations still home to half of world’s hungry and malnourished people: report 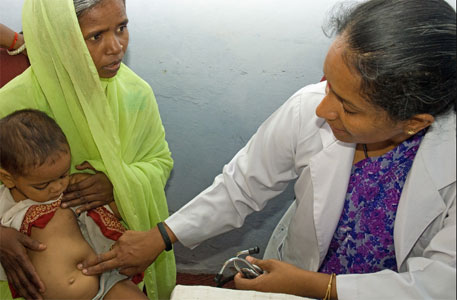 Brazil, China, India, Indonesia and Mexico may be rising economic powerhouses, but these fast-expanding, middle-income countries are still home to nearly half of the world’s hungry people, numbering 363 million, says a new report.

In such a scenario, attention must be paid to those living in the “economic middle” to effectively combat hunger and malnutrition on a global scale, according to a report published by the International Food Policy Research Institute (IFPRI), a global agricultural research centre.

The 2014–2015 Global Food Policy Report (GFPR) urges the governments of middle-income countries to focus on nutrition and health, close the gender gap in agriculture and improve rural infrastructure to ensure food security for all.

“It may seem counterintuitive, but these growing economies play a key role in our ability to adequately and nutritiously feed the world,” Shenggen Fan, the director general of IFPRI, said.

Examining food security
Food security and nutrition situation in middle-income countries is one of the seven food policy issues examined in this year’s GFPR that deals with food, agriculture, and nutrition developments with a view to reduce poverty worldwide.

“It has become clear that the factors that influence people’s nutrition go well beyond food and agriculture to include drinking water and sanitation, the role of women, the quality of caregiving, among others,” Fan added.

The report also points out that food insecurity has contributed to instability in West Asia. It draws attention to the urgent need to regulate food production to prevent food-borne diseases, help farmers increase their income or switch over to non-farm employment, improve social protection for the rural poor and support the role of small-scale fisheries in satisfying the global demand for fish.

“We made some important strides toward global food and nutrition security in 2014,” Fan said. “For example, nutrition shot up to the top of the global agenda and the concept of climate-smart agriculture has gained a foothold. Now, we need to keep these and other food-policy issues high on the global development agenda to ensure we eliminate hunger and malnutrition worldwide.”

The global landscape of poverty, food insecurity, and malnutrition and implications for agricultural development strategies