By the turn of the century, you can dig your teeth into anything starchy and yet maintain good dental health -courtesy, genetically engineered plants 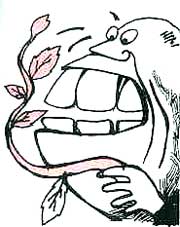 IF FEAR of tooth decay is what stops you from having starchy food, it will soon be relegated to the past. A revolution in the field of dentistry is on the anvil. Soon, we may even be able to eliminate tooth decay by just biting into a fruit. A remarkable feat of genetic engineering involving manipulation of plants to produce antibodies against the tooth decay-causing bacteria, will make this possible after another five or six years, report scientists.

The problem of tooth decay is being tackled in a novel way by a research team at the Dental School at Guy's Hospital in London, UK. Under the leadership of Julian Ma, the team has been working for the last 15 years to produce a vaccine against Streptococcus mutans, the bacterium principally responsible for tooth decay.

Recently, the team changed its strategy and started programming plants to produce antibodies against the bacterium. Instead of attenuating the bacterium and injecting it into the body to allow antibody formation against it, scientists targeted plants to do the job.

By inserting genes for specific anti- bodies into plants, we get antibody factories where they can be generated on a large scale. These antibodies can be har- vested and then applied on teeth from outside.

Applied at first on to teeth as a protective gel, the antibody can be used in a lot of exciting ways. Introducing anti- bodies into toothpastes and mouth- washes is one scintillating possibility. As Julian foresees, this could eventually lead to, "a wild possibility of getting genes into some sort of edible plants like potatoes, tomatoes or bananas".

The type of antibodies needed to protect teeth are called secretory anti- bodies, "which can be made more easily by plant cells than animal ana human cells", says Julian. This was precisely the reason why plants were used for anti- body production instead of using cul- tures of animal cells in laboratories. Until now, it has been impossible to make secretory antibodies in proper form in the laboratory.

The secretory antibody molecule consists of four different proteins, which have to be assembled together into the proper format for making the antibody. Plant cells not only produce all four proteins, but can also put them in the right shape. Interestingly, plants are better at making complex anti- bodies than cultures of animal cells.

Another advantage of plant antibodies is the scale they can be grown on. Almost limitless quantities of the antibodies can be made. "We can grow fields of antibodies if you want," says Julian.

So far, the research has been carried using tobacco plants only, since it is very easy to insert genes into them. Scientists, however, feel that the same technique using the bacterium Agrobacterium tumefaciens, which naturally introduces genes into plant cells, can be used to get the genes into tomatoes or bananas.

A major disadvantage of the use of passive immunisation remains the repeated treatments needed. But tests show that on application of the anti- Streptococcus mutans antibody, the protection lasts much longer than expected.

What seems to happen is that when the Streptococcus mutans are killed off by the antibody treatment, growth of other species of harmless bacteria takes place, and later cannot be displaced by reinfection with Streptococcus mutans, feel researchers. (Spectrum, VoI249).