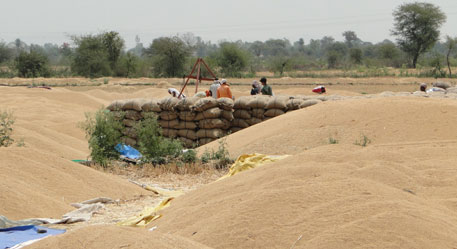 INDIA’S ability to continue procurement of foodgrains at the minimum support price (MSP) from low-income farmers will be decided at the 9th ministerial conference of the World Trade Organization (WTO) opening in Bali on December 3 when once again, developing countries are attempting to set right WTO’s lopsided Agreement on Agriculture (AoA). If some compromise is not worked out with the developed world, specifically the US and the European UnionÃ”Ã‡Ãª(EU), India’s National Food Security Act (NFSA), passed in September, could be severely constrained by current rules that impose stiff conditions on agriculture subsidies.

Indian officials counter that this is a narrow view of the problem which ignores theÃ”Ã‡Ãªrealities of the agricultural scenario. India supports 17 per cent of the world’s population and its farmers are among the poorest, points out Sudanshu Pandey, joint secretary in the Ministry of Commerce. While per capita landholding in the EU, US and Canada have almost doubled, in India it has declined to 0.13 hectare of arable land. Besides, it is largely rain-fed agriculture. “We have to take on board the concerns of our farmers who are extremely resource poor. In India, the issue is not just about food stockpile for food security but also about supporting low-income farmers,” Pandey says. He insists that NFSA has nothing to do with the Bali negotiations. “This is purely a domestic issue. If we can comply with WTO provisions there is no problem.” But there is, indeed, a huge problem with WTO’s provision on subsidies which are heavily tilted to favour rich nations. Experts point out WTO’s 1994 AoA stems from the Blair House agreement of 1993 that was cobbled together by the US and the EU in order to shield their phenomenal farm subsidies from any dispute at WTO.

This has allowed the two largest trading blocs in the world to provide huge subsidies to their farmers without inviting penalties (see ‘How the US and Europe hide theirÃ”Ã‡Ãªfarm subsidies’). In WTO parlance, farm subsidies are categorised in three boxes: amber (calculated as AMS or aggregate measurement of support) which is subject to limits and invites penalties if exceeded; green, which is protected from legal challenge, and blue which has no limits. 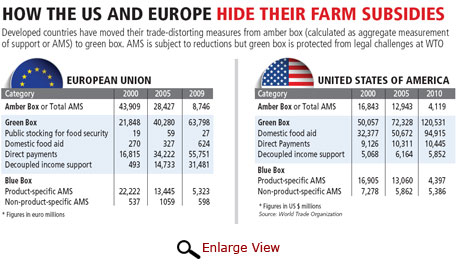 While 30 members have commitments to reduce their trade-distorting domestic support in the amber box, those without commitments have to maintain their total AMS to within 5 per cent of the total value of production, that is, the de minimis level. In the case of developing countries the de minimis is 10 per cent of their value of production of a particular crop. There is no amber or blue box for India and other WTO members. More problematic is the way the de minimis support is calculated. It is an outdated and flawed methodology based on the external reference price (ERP) prevailing during 1986-88. As Pandey points out, the rates are irrelevant since prices have shot up 650 percent in the intervening 25 years. “These inherent inequities in AoA prevent developing countries from meeting their special needs on food security.”

Rajiv Kher, additional secretary in the Ministry of Commerce and India’s chief negotiator at the WTO, says the G-33 proposal is justified since it serves a dual purpose of helping resource-poor farmers and providing food security to the poor, whereas the US and the EU continue to give out billions in farm subsidies that they had committed to do away with in the Doha round.

The G–33 argues that the illogical way trade-distorting domestic subsidy is calculated means that several developing countries are in danger of reaching or exceeding their permitted limits. How much a government actually spends is not the criterion but what matters is how much higher the government’s current administered prices are based on ERP of 1986-88. No allowance is made for inflation or rise in commodity prices. A telling example is what India’s procurement entails under the WTO system. The ERP notified by India is Rs 3.52 per kg while the current year’s MSP is Rs 19.65 per kg. This means the subsidy will be an untenable figure of over Rs 16 per kg.

That the system is intrinsically flawed and outdated is unlikely to cut any ice with the rich nations at Bali. The US has been adamant that its focus, like that of other developed nations, is on anÃ”Ã‡Ãªexpensive trade facilitation agreement at Bali, aimed at expediting the movement and clearance of goods without hurdles at entry points. Although the draft proposals have several hundred square brackets (unresolved issues on which there is no agreement), US Trade Representative Michael Froman has warned that if there is no strong, binding trade facilitation agreement it would spell doom for WTO. The US contention is that trade facilitation will deliver the most benefits for developing countries by reducing costs of trade for them by as much as 14 per cent. But it is an expensive proposition and there is no mention of who will be picking up the tab for these measures. Developing countriesÃ”Ã‡Ãªin any case believe it is the rich world that has more to gain, although Froman says it’s the other way round.

Kher, in fact, has been categorical that India will not agree to this unless there is a quid pro quo on the G-33 proposal. He told an industry consultation organised by the Confederation of Indian Industries in July that if the proposal on food stockholding does not move forward, the trade facilitation agreement will not happen either. For India, this will mean severe constraints in implementing the NFSA. According to one calculation, India’s use of MSP this year would be limited to 10 million tonnes, whereas its requirement for procurement is being projected at around 34 million tonnes.

As a way out of the impasse, developed countries are offering a “peace clause” which will provide temporary relief of two years to developing countries when they will not be hauled up for breaching the de minimis levels. The signs are not very promising that Bali will provide a breakthrough. But, says Abhijit Das, head of the centre for WTO Studies, Delhi, “We should not give up. At WTO it is persistence that wins.”