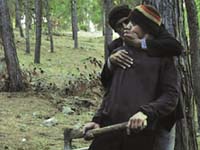 Has the environmentalist movement become a toothless tiger? What about the media; what are they good for? Should we quit eating red meat? What are the impacts of rearing animals for consumption?

These are some of the questions that dogged me during my recent visit to the biggest city of Brazil, Sao Paulo. I was not the only one to be baffled. Numerous such provocative issues hit all those who were there to attend ecocine--an international environmental film and video festival. This year's ecocine festival was organised under the aegis of the Ecos da Planeta (Echoes of the Planet)--a Brazilian environmental group.

The three-day event included 26 environmental films from across the world. The jury consisted of five members, including Malini Sahai, a film consultant from India. Brazil's Serras da Desordem (Disorder Ridges) bagged the best film award.The film was on the dislocation in the life of a native whose family had been displaced from its traditional home. A similar tale was narrated in Atash, an Israeli film about the Palestine Arabs.

"Cultural diversity is as threatened as biodiversity. The current idea of environmental preservation sometimes leaves out human activities, as if the man-nature relation were incompatible," said Ariane Porto, director of ecocine, in a statement.

True. Portio's statement reminded me of the deteriorating lives of the region's Caicara communities, who live in the rainforests in the southeast of Sao Paulo state and depend on the forests for subsistence. The forest was the first victim of the European colonialists' efforts to settle in Brazil.

I was told that the forest once covered the entire Brazilian coastline, spreading over an area of more than 110 million hectares. At present, it covers only 8.8 per cent of the original area; the remaining green cover is also under pressure. Continued deforestation for cattle-ranching, coffee plantation and immigrants' settlement have taken a toll on the forests as well as their inhabitants.

Ironically, many times, the laws meant to protect the environment turns askew for the indigenous people of the region--be it Brazil or elsewhere. For instance, a seafarer crafts his canoe out of a single log and for that, he uses a tree-trunk that has already collapsed on its own. Native people collect branches of caxeta bush to make handicrafts. But under the Brazilian law, collecting fallen trunks or branches is a crime.

The films screened at the festival reflected many such issues. The message was clear to preserve these indigenous people's lifestyle, such laws need to be amended. But filmmakers have their limitations and could do little beyond the audiovisual works. ecocine organisers, however, endeavoured to go a step beyond the foyer of the movie hall showcased a canoe, placed strategically, to highlight the issue. The film festival also paid its homage to Sao Paulo-born Amyr Klink, the internationally known seafarer. A documentary on his life was screened during a section devoted to Caicara culture.

The event had a special session to screen six environmental films produced in India. Mike Pandey's Shores of Silence (winner of the Green Oscar 2000-01) and Alva brothers' Lions of Gir received applauds. Brazilians sitting beside me did not forget to tell me that it was their first introduction to the jungle king and its habit.

After all, the idea was to inculcate ecological knowledge among all. "Even if environmental issues are a subject that is more and more present in our daily lives, some surveys show that they are still unknown or unrecognised by a major share of the society," said president of the Ecos da Planeta, J Gontow.

Brazil is one of the most ecologically endangered countries, facing continuous environmental depredation due to developmental and commercial activities. But, appreciably, Ecos da Planeta's efforts to generate consciousness about the imminent danger had received support from various corporate houses and commercial monopolies.

As the carnival was approaching its concluding sessions, I noticed a showcase, Mostra CriancEco, running parallel to the film festival . It was for children, where films were shown, their queries were appreciated and special interaction sessions were organised with the filmmakers.

As I left the festival, I could see the experts and luminaries present in the foyer still deliberating the questions, that had dogged me, under the title Sustainability in debate.