First day of Kumbh leaves a trail of filth 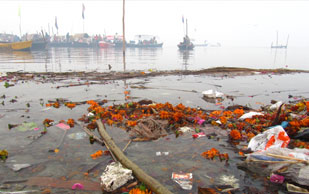 Just a day after first Shahi Snan of Kumbh Mela on Makar Sankranti day, the arrangements for the deluge of pilgrims are proving insufficient. The toilets have started overflowing and visitors are greeted with stench from the open garbage pits and water holes filled with urine and human excreta.

The Mela began on January 14 with about 10 million people taking a dip in Sangam, the confluence of Ganga, Yamuna and the mythical Saraswati. People had started bathing much before sun rose. The day ended with the ghats covered in slime, mud, and flowers, offered during the Ganga puja.

The first of the three Shahi Snans exposed the gaping holes in the arrangements by the state administration for the World’s largest gathering of people for a single purpose. By 8 am on Makar Sankranti, the innumerable polythene bags, footwear, paper and huge quantities of flower floated on the river surface. The sandbanks formed in the middle of the river were dotted with moulds of human excreta. Plastic bottles of ghee, honey, and even beer were seen either floating in the river or on the sandbank. There were just 50-odd people picking rubbish from the ghats after the crowd started dwindling. The refuse on the sand banks lay where it was for the river to sweep away.

For solid waste disposal, the mela authorities have made pits of about 10 square feet at several places. The pits are cleaned occasionally. It only takes a day for these pits where pilgrims throw all the plates and plastic glasses to get overfilled.

By night smog covered the mela area with hawans being performed in all the camps. People also burnt wood, plastic and rubber tyres to keep warm in the cold.

The mela authorities, too busy with the security arrangements and crowd control, forgot to check people from disposing waste in the river. Their shoddy arrangements drew flak from several quarters, including Samajwadi Party national general secretary and member of Parliament from Allahabad Rewati Raman Singh.

He said Kumbh is a picture of utter neglect and chaos in the wake of lackadaisical attitude of mela authorities who are least bothered about the comfort and welfare sadhus, pandas, teerth purohits, boatmen and Prayagwali Sabha—the umbrella body of local priests which has a major say in allotment of land to different akharas and other religious organisations.