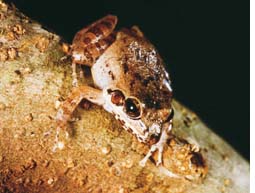 there is little chance for a new bird or butterfly being discovered in the Western Ghats now, says a recent study. It has, however, not ruled out the discovery of frogs and grasses.

First time in India, a team of researchers including scientists from the University of Agricultural Sciences in Bangalore have classified the patterns of species discovery of eight important animal and plant groups in the Western Ghats. The study has analysed the factors which helped in the discovery of these species.

The species studied included birds, butterflies, frogs, tiger beetles, grasses, ferns and orchids. The findings have been published in the June 2007 issue of the Journal of Biosciences (Vol 32, No 4).

The researchers gathered data on four animal groups (birds, butterflies, frogs and tiger beetles) and four plant groups (asters, grasses, orchids and ferns)."The selection of species was based on the availability of relevant data and the clarity of their taxonomic status," says R Uma Shaanker, professor at the department of crop physiology, University of Agriculture Sciences, Bangalore.
Many of the species recently discovered in the Western Ghats, a biodiversity hot spot, were amphibians. "Species discovery in a region follows a specific pattern. A number of factors determine the way species are discovered," says Shaanker. They include, he says, body size, colour, range of movement and visual appeal of the species.

Many studies have linked the rate of species discovery to body size, for example, in British beetles, to body size and range of species movement in neotropical mammals and North American butterflies. In South American oscine passerine birds, the chance of discovery was influenced by quantity, geographic and altitudinal ranges of their movement and body size.

In the Western Ghats, say researchers, factors such as body size, colours on feathers, nature of the habitat and feeding habits determined the discovery of birds. For butterflies, the researchers found body size (wing span), number of colours on the wings and the altitudinal range as determining factors. On flowers like orchids, the study considered the number of flowers in inflorescence--floral arrangement in a plant--size of the flower, length of inflorescence and the characteristics of the habitat.

The discovery pattern for birds and butterflies showed saturation which means, in all likelihood, there is little chance for further discovery among the group.

Discovery pattern for ferns, tiger beetles and asters also showed that there is only marginal scope of discovery.
There are more species yet to be discovered among frogs and grass. Locally seen--endemic--frogs have an edge over their non-endemic counterparts, says the study. The orchids too share the same pattern. "Non-endemic species are more widespread and the chance for them being discovered are high while endemic species are confined to a narrow range," said Shaanker.

On the evolutionary front, grasses are among the most modern taxa--group of species. Researchers, however, do not agree that the pattern of species discovery is linked to evolutionary trends. "A few tax might have reached saturation. This does not mean that more biodiversity cannot be uncovered," clarifies Shaanker. The advancement in the science of taxonomy like using genetic analysis can help in identifying new species, he adds.