2010 oil spill in Gulf of Mexico may have caused heart defects in tuna species, reducing their numbers 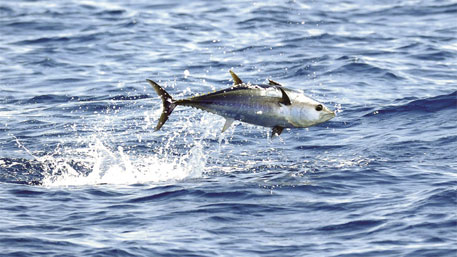 IN APRIL 2010 when the BP-operated Deepwater Horizon oil rig sank in the Gulf of Mexico following an explosion, it led to the largest oil spill in the US history. The damaged oil well spewed over 636 million litres of crude oil into the gulf in three months. While the slick immediately killed thousands of marine species, it could have hampered the growth of the rest, including the commercially and ecologically important Atlantic bluefin tuna, yellowfin tuna and amberjack.

In a first-of-its-kind study to understand the disaster on the early life development of fish, scientists from the National Oceanic and Atmospheric Administration (NOAA) in Seattle have found that the oil spill could have led to lethal heart defects among several fish species. These fish spawn during the spring and summer months, a time that coincided with the disaster. As their buoyant embryos float to the surface, they get exposed to the oil. John Incardona of NOAA says exposure to polycyclic aromatic hydrocarbons (PAH) present in the crude oil may cause heart defects in developing fish embryos. Heart function is important for fast-swimming predators as they have high demand for oxygen.

It is already known that crude oil disrupts excitation-contraction coupling in muscle cells isolated from the hearts of bluefin and yellowfin tunas. To ascertain the impact of PAH on cardiac function, the researchers exposed embryos of bluefin tuna, yellowfin tuna, and amberjack to oil samples collected from the affected areas. They were exposed to 1-15 μg of PAH per litre of water—much below the PAH concentrations in samples collected from the Gulf of Mexico during the spill. Each species developed cardiac defects such as irregular heartbeat, circulatory disruption and accumulation of fluid in the pericardium. The defects were consistent with the dose of oil they were exposed to.

“The results suggest a widespread loss of pelagic fish larvae due to cardiac defects as a consequence of the Deepwater Horizon disaster,” say the researchers in a paper published in Proceedings of the National Academy of Sciences on March 25, 2014.

Study: Estimating upper bounds for occupancy and number of manatees in areas potentially affected by oil from the Deepwater Horizon Oil Spill

Research: Cytochrome P4501A biomarker indication of oil exposure in harlequin ducks up to 20 years after the Exxon Valdez oil spill